Dimitri Vassilakis is a celebrated award winning saxophonist/vocalist/composer/educator. Has recorded 5 albums for the historic Candid Label in London "Labyrinth" was voted 2nd jazz album of the year at the BBC Internet poll and was album of the month March 2002 for BBC Music Magazine. New album "Across The Universe" recorded in New York, with top jazzmen from all continents, is out on Candid Records 50th anniversary edition. Has played all around the globe, notably at Birdland NY, Yale, Natural History Museum Washington DC for the Smithsonian Institute and Jazz appreciation month, Onassis Cultural Centre New York, Sweet Rhythm and Zinc New York, London Jazz Festival Royal Festival Hall, South Africa Tour and major festivals in Europe and the Balkans, while reviewers refer to him as the Greek god of jazz… Has played and recorded among others with: Jeff "Tain" Watts, Dave Liebman, Marc Johnson, Abdullah Ibrahim, Essiet Essiet, Jamie Cullum, Adam Nussbaum, Theodosii Spassov, Ralph Peterson, Andy Sheppard, Milcho Leviev, Ron Affif, Juliet Kelly. Has performed for 2 Greek presidents and for ex US president Bill Clinton. In Greece has appeared at the Athens Festival, City Of Athens Jazz Festival, Delphic Games, Fringe Festival, Athens 2004, while concert halls & theatres include: Herodion, Lycabettus, Megaron, Pallas Theatre etc. Has presented 2 yearly series of radio and TV programs for national TV NET (Jazz Club), Radio 3 and Channel 7 (All That Jazz), plus articles and interviews at BBC Radio3 for London Jazz Festival and numerous Greek Radio and TV stations internationally. Has taught at the Athens and Macedonia Universities and has presented seminars at Queens, Skidmore, Columbia, DePaul, Royal Academy Of Music, Paris Conservatoire etc. He endorses Bentley luxury cars and produces the 1st of a series of "Jazz For Bentley” compilation albums. Find more at: www.dimitriosvassilakis.com www.facebook.com/DimitriVassilakis http://twitter.com/Dimi_Trees http://dimitrivassilakis.blogspot.com/ 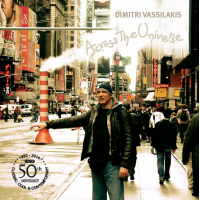 Parallel Lines--an album that's filled with exquisite musicianship, fire, and hard-swinging grooves--could justifiably put Greek saxophonist Dimitrios Vassilakis on the who's who list of world-class reed players. Born in Athens, Greece and living in London, he is also an educator pursing a PhD while teaching and lecturing in the Music Department at Makedonia University in Thessalonica. ...

Greek saxophonist Dimitri Vassilakis' third album for Candid is a one-course, big plate feast of rugged, gruff-toned tenor saxophone and high-torque bass and drums. It swings hard from start to finish, with only the halfway point “Soul Eyes" providing a pause, and does both Vassilakis and his primary influence, Sonny Rollins, proud. It was released in ...