Dead Cat Bounce, Boston's Outstanding Jazz Act (Boston Music Awards, Phoenix Music Poll and Improper Bostonian) and recipient of commissions from Meet the Composer and Chamber Music America, is one of the few recent jazz bands to have arrived on the scene with its own distinctive voice. Featuring four saxophones of all ranges plus upright bass and drums, Dead Cat Bounce is the unique artistic vision of Matt Steckler, its founder and leader. The group formed late in 1997 as a recording project. Word of DCB's high caliber as a performance ensemble quickly spread, and now the group plays festivals, concert series and notable clubs throughout North America. Dead Cat Bounce invokes Charles Mingus and the World Saxophone Quartet with their "tightly arranged, swirling contrapuntal reeds and multi-part, blues n' roots-infused tricky compositions" (Jon Garelick, the Boston Phoenix) 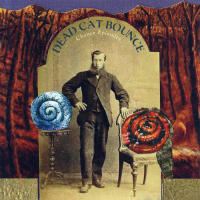 It does not behoove to fall for the apparent flippancy of Dead Cat's Bounce. The name of the ensemble is merely an ironic take on the state of the union; and on a larger canvas it casts aspersions on the relevance of capitalism without the folk tradition. Even its use of klezmer music and a mash ...

Saxophonist Matt Steckler is a man of many parts. As a musician he has led his own bands including the imaginatively titled Dead Cat Bounce and has played with some of the finest including saxophonists Anthony Braxton and Lee Konitz, and percussionist Bobby Sanabria. His varied associations and wide comfort zone are manifested in the array ...

Combining a supremely agile multi-reed quartet with a lithe rhythm section, Dead Cat Bounce is anything but moribund on its Cuneiform debut, Chance Episodes. The title is a bit of a misnomer as well, as the highly developed compositions--all written and arranged by saxophonist/woodwind multi-instrumentalist Matt Steckler--leave little to chance. Originally commissioned by Chamber Music America ...

Dead Cat Bounce is a stock market term, unusual for a jazz band, but no threat to our four legged felines. But nonetheless, their music is a wonderfully upbeat mixture of hard-bop and modern jazz with a four horn front line. Their music is exciting, full of exhilaration and humor which recalls if nothing else, the ...

Matt Steckler, driving force behind the ensemble Dead Cat Bounce, joins three other reed soloists and an actively charged rhythm section in a program of Steckler compositions. Chance Episodes (Cuneiform Rune 323) is the concretion of the session, so to speak, and is some kind of concretion at that! It's the dynamic of a tightly interactive ...