Trombone player, vocalist, composer and arranger David L. Harris Jr. embodies the edge of modern jazz and the sultriness of blues. Every time he steps on stage, David takes us on the emotionally engaging journey of love and liberation, wrapped in a sound that embraces the groove, grit and swing of the past. Growing up in a neighborhood called Scotlandville, in Baton Rouge, La, David L. found his fingers pressed against the sliding brace of the trombone at the age of sixteen and has never let go since. Self taught, David L. would spend seven hours a day practicing while allowing the sounds of legendary musicians like, Tyree Glenn, Joe “Tricky Sam” Nanton and Al Grey train him along the way

This week we celebrate Blue Note sessions that are 50 years old this month by Lee Morgan, Elvin Jones, Duke Pearson, Eddie Gale, Jack Wilson & The 3 Sounds. But we start with two tracks from trombonist, vocalist and Baton Rouge native David L. Harris who appeared at Chorum Hall in Baton Rouge on ... 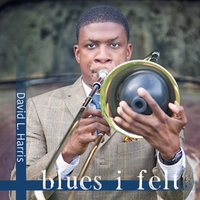 Label: Self Produced
Released: 2017
Track listing: A Pisces' Dream; Bein' Green; Dewy's Notion; Mood Indigo; DJ's Induction; Old Man Speaks; There Will Be A Time; The Point To See; Moody's Mood For Love; There Is No Greater Love.

The blues isn't merely a form or genre. It's an emotional response, a personal internalization of an idea that invites extemporization in its reflection. While there's a specific progression and certain stylistic considerations that mark music as such, there's undeniable variety within the fixed aspects. No two people feel, sing, or play the blues exactly the ...