DAVE FOX BIO In his career, the inventive keyboardist-composer Dave Fox has created a distinctive and appealing musical personality along with more than his share of memorable music. He is easily recognizable whether playing modern mainstream jazz, avant-garde explorations, rock or original classical pieces. Dave first became interested in becoming a jazz musician when he heard Chick Corea on one of the early Return To Forever albums. He earned a Bachelor’s and Master’s degree in classical music, developing his jazz chops on his own. Since 1996 he has taught at Greensboro College in Greensboro, North Carolina

Flautist and shakuhachi master Geni Skendo does not genre-mash so much as genre-crash, like a late-night interloper joining a lame party and livening it up with exotic sound. It's miraculous, this color he brings to anything, given the drab Iron Curtain he exited under on his flight from his native Albania, traveling to Boston, Massachusetts to ... 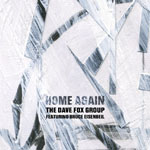 Label: Konnex Records
Released: 2009
Track listing: Leaving The City; Of All The Tapas Bars In The World...; The Well-Prepared Suitcase; Airports And Me; An Encounter With A Street Troll; Nightfall In Taos, New Mexico; Home Again, For Now

The third release of the Dave Fox group, augmented now by avant-guitarist Bruce Eisenbeil, presents free improvised music at its best. This is adventurous music that's raw, muscular, unstructured, intense, idiosyncratic in its risk-taking approach but still cohesive in a unique way. The group is comprised of North Carolina's Greensboro College music educator Fox (here on ...

Although Dedication Suite is reminiscent of New York City's creative improv scene, pianist Dave Fox resides in North Carolina, quite removed from the Big Apple. Where many jazz fans embrace soft melodies and rhythms of the likes of Horace Silver and McCoy Tyner, Fox not only pushes the envelope, he simply ignites it. At times, he ...