Bruce Williams is a powerful young jazz saxophonist who hails from our nation's capital of Washington, D.C. He has made his presence known on the jazz scene by garnering critical attention with his own enthusiastically received CD releases - "Brotherhood" and "Altoicity" - issued on Savant Records. He's made an indelible impression as a sideman on over twenty other CD and video recordings. Bruce has performed, toured, and recorded with a long roster of jazz legends - Little Jimmy Scott, Frank Foster, The Lincoln Center Jazz Orchestra, Stanley Cowell, Louis Smith, Cecil Brooks III, The Count Basie Orchestra, The World Saxophone Quartet, Russell Gunn, Curtis Fuller, and Roy Hargrove to name a few. Bruce Williams is a versatile saxophone stylist, performing in a variety of diverse playing environments - from traditional to hip-hop to the avant-garde 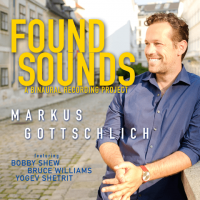 Label: Self Produced
Released: 2020
Track listing: Irmageddon; Fiaker Lied; Shofar; Trainology; Time Will Tell; Between a Rock and a Hard Place; Taipei; On the Brink; A Last Dance.

Found Sounds? As it turns out, there is a special story behind that. For four years leading up to this recording, Austrian-born pianist Markus Gottschlich preserved “sounds" he heard around the world using a binaural mic and hand-held recording device. He writes that one thing he found was that “sounds, more than any other sensory stimulus" ...

Over the years, there have been many recorded tributes to John Coltrane but saxophonist Lakecia Benjamin takes the concept farther by paying homage to the work of both John and his wife, Alice Coltrane. Benjamin plays their compositions in a wide range of settings with a large cast of musicians, including a couple who actually worked ...

Mike Lee has a Song for All of Us

Mike Lee's compositions draw from an eclectic mixture of inspirations and yet are still rooted in the Jazz tradition. This can easily be felt on his latest album, Song for All of Us. The album features Mike Lee on tenor saxophone; Lenny White on drums; Ed Howard on bass; George Colligan on piano; Dave Stryker on ...