Atlanta native Bradford Rogers is a producer, engineer, singer, songwriter, and multi-instrumentalist. He is the founder and owner of independent label Worldsongs, Inc., whose mission is to nurture talented undiscovered artists in a variety of genres, focusing on jazz, worldbeat, and ethnic-influenced music. Bradford is a Recording Academy Chapter Governor, and has performed with such multiplatinum artists as Michael McDonald, James Brown, Bobby Valentino, En Vogue's Dawn Robinson, Sleepy Brown and Cee-Lo. Bradford has performed as a featured artist at venues such as the Atlanta Jazz Festival, has won awards including the Future Of Jazz competition, has appeared on programs such as Fox 5's Good Day Atlanta; and his music is played regularly on jazz and college radio stations including Atlanta's flagship jazz station WCLK FM 91.9. His latest CD,Guiro!, fuses traditional African and Latin styles, postmodern jazz, and a touch of Pop/Rock and Electronica. Another recent collaboration with Algerian artist Chiheb produced the track "Comet," which is featured on the compilation United DJs and Producers of Algeria. 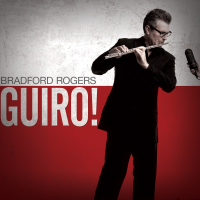