My career in music began when I was 11 years old. I started playing trumpet and continued for 7 years. I began playing guitar at 14 and have been playing for 12 years. In 2008 I graduated from Morehead State University with a Bachelor of Music and in 2010 from The University Of The Arts in Philadelphia, PA, with a Masters degree in Jazz Studies. I have had the opportunity of studying under several great teachers including Ray Ross, Glenn Ginn, Gordon Towell, Steven Snyder, Tom Giacabetti, Mike Kennedy, Ben Schachter, Don Glanden, Richard Lawn, Jimmy Bruno, and Pat Martino. After finishing college I moved to Cincinnati, Ohio, and began performing as a solo jazz guitarist 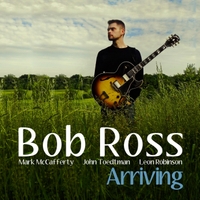 Arriving, while low-key in many ways, is something of a signal flare, sending out notice of an on-the-rise leader located in Ohio. Newcomer guitarist Bob Ross graduated from Morehead State University with a Bachelor of Music in 2008 and completed his Master's degree in Jazz Studies at The University Of The Arts in 2010. A year ...

Meet Bob Ross: My career in music began when I was 11 years old. I started playing trumpet and continued for seven years. At 14, I began playing guitar and have been doing so for 12 years. In 2008, I graduated from Morehead State University with a Bachelor of Music degree. In 2010 I earned ...

Night At The Greenwich

Arriving, the new release from Bob Ross, has arrived and is capturing a musical journey already in progress Cincinnati, OH – On June 25th, 2013 guitarist Bob Ross brought years of self discovery and composition into a single focal point with his debut album, Arriving. The ascending artist brings forth an array of original material that ...