Bob Quaranta received his BM in music theory from the Philadelphia College of Performing Arts. For over ten years, he was a member of Mongo Santamaría's band and served as musical director. Two of the recordings Bob appeared on with Mongo were nominated for Grammy Awards: Mongo Magic and Free Spirit/Espíritu Libre. Quaranta has also performed and/or recorded with: Dave Valentin, Willie Colón, Ray Barretto, Tommy Igoe, Angel Canales and Jellybean Benitez. With Ed Soph, Horacee Arnold, John Scofield, and Tom Barney he recorded on the Yamaha instructional video The Drumset, A Musical Approach

Ed Palermo: Not Only In It For The Money

It's been twenty years since saxophonist-composer-arranger Ed Palermo and his Big Band began playing the music of Frank Zappa. Twenty years, not a lot of bread but a whole lot of love from fans and musicians alike. Oh No! Not Jazz!! on Cuneiform Records marks the band's fourth Zappa album and the third for that remarkable ... 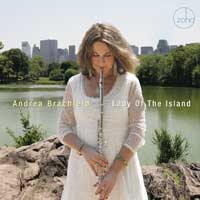 Flautist Andrea Brachfeld has always professed an affinity for jazz and, though her background clearly demonstrates varied musical tastes, she has always been a hard bop musician at the core. Lady of the Island is the realization of a dream where the music selected reflects the jazz styles that tugs at her heart the most. Begun ...