Bipolar was born because one morning in July 2005, trumpeter/composer Jed Feuer awakened with a fervent desire, after a long layoff, to return to playing. His aim was to start a quintet which would demonstrate variety, energy, taste and almost always, a departure from the norm. He called his pal, pianist Craig Swanson, and asked him to join forces. Craig expressed great interest and enthusiasm. Within six months, BIPOLAR was performing at Bargemusic, The Metropolitan, Room, Jazz at St. Peter’s and so on. So with Jed on trumpet + flugelhorn, Craig at the piano, Stephanie Long on saxophones, flute + piccolo, David Ostrem on double bass, and James Windsor-Wells on drums, Bipolar is paving new roads into jazz repertoires and performance possibilities

Music is diverse and flexible. Bipolar brings both elements together in their debut release, Euphrates, Me Jane, a collection of 14 songs that includes a few originals and some interesting arrangements of classical compositions, jazz standards, and even popular titles. Bipolar is a five-piece ensemble composed of Jed Feuer on trumpet and flugelhorn, Craig ... 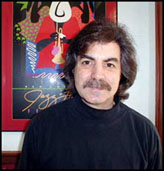