By Woodrow Wilkins
April 9, 2009
Sign in to view read count 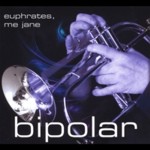 Music is diverse and flexible. Bipolar brings both elements together in their debut release, Euphrates, Me Jane, a collection of 14 songs that includes a few originals and some interesting arrangements of classical compositions, jazz standards, and even popular titles.

Bipolar is a five-piece ensemble composed of Jed Feuer on trumpet and flugelhorn, Craig Swanson on piano, Stephanie Long on saxophones, flute and piccolo, David Ostrem on bass, and James Windsor-Wells on drums. Guest drummer Robert C. Kelly sits in on a few selections.

Feuer's "Bipolar" is a lively piece. After trumpet and sax open the song in a duet, the bass solos, aided subtly by the drums and piano, with the horns popping in here and there. Each piece solos, with some of the highlights being Windsor-Wells' cymbals and Swanson's piano.

"Killer Beau (Soir)" is Swanson's leisurely arrangement of a Claude Debussy composition. With muted trumpet and flute making appearances, it is a charming take on the classical piece. Then, without warning, the melody quotes Benny Golson's classic jazz piece, "Killer Joe," while maintaining the jaunty pace.

Another Swanson composition, "Closed (Due to Fire)," begins slowly with a piano solo, complemented softly by the bass and a few cymbal strikes by Kelly. The pace quickens as Long enters with a saxophone lead. Feuer joins with muted trumpet fills. The two play off each other exceptionally well. After the piano-led bridge, Feuer delivers a playful solo. As it progresses, the sax comes back in, and the other musicians become a little more active. Kelly injects some rim shots to aid Swanson's solo.

It's not often that a jazz band culls from multiple genres in addition to creating new music. Bipolar's approach makes for a collection that is as interesting as it is diverse. Feuer composed three of the four new songs, and arranged most of the covers, including Bill Withers' "Just the Two of Us" and The Beatles' "And I Love Her."