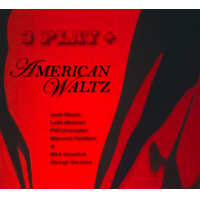 3Play+ are a quartet, featuring trumpeter Phil Grenadier, pianist Josh Rosen, bassist Lello Molinari and drummer Marcello Pellitteri. Originally a trio, the band became 3Play+ with the addition of Grenadier; presumably the idea of calling the band 4Play was dismissed at an early stage. On the group's debut, American Waltz, it is joined on some tracks ...

The music of a band is determined by its players. 3 Play+ assimilates its diverse influences to bring about a confluent whole. The music scopes a wide panorama, from lilting waltz to startlingly fractured-time piece. Each track is a miniature encapsulation of its innovation, an inspired journey into the known and the unexpected. 3 Play+ is ...

The cleverly titled American Waltz might deserve a more fitting inscription as American Quilt," because woven into the admirably crafted compositions of leader/pianist Josh Rosen are all the elements that are American music. Rosen, a faculty member at Berklee College of Music, lists Bob Moses, Bennie Wallace, and }}George Schuller}} as performance partners. Besides ...