Results for "A Time Of New Beginnings"

A Time of New Beginnings

A Time Of New Beginnings 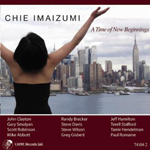 Two coasts and the Mile High City--therein lies the talent pool from which composer and arranger Chie Imaizumi selected her team. Soloists and leaders themselves, they form the orchestra for A Time of New Beginnings. Imaizumi scored DownBeat Magazine's Rising Star Composer honor for her 2007 debut, Unfailing Kindness (Capri Records). That same year, ...

Composer and arranger Chie Imaizumi's second album, A Time Of New Beginnings, is filled with star players from the jazz world. It's a beautifully crafted, beautifully played album, with a warm and familiar feel to its nine tunes that, at times, creates a real sense of nostalgia. Imaizumi began her musical career in ...