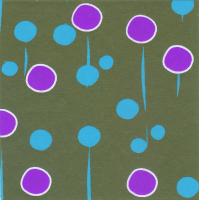 Composer and keyboardist Michael Robinson is as prolific as he is creative. Using his own invention, the meruvina, he creates unique electro-acoustic pieces that brim with spontaneity. His first release of 2021, the exuberant Taffeta Patterns, differs from his most recent discs in its infectious dance beats.

A single track, lasting a little under an hour, "Taffeta Patterns" consists of ethereal, eastern-influenced harmonies layered over a disco-like cadence. Within this contrasting yet complimentary construct, vibrant melodic fragments shimmer and shine. Underscoring the chiming fluid lines are occasional bursts of elegant glissando chords.

As the music evolves, it incorporates several delightful angularities giving it a crystalline structure. These types of embellishment to the main melody give its rhythmic structure an almost primal sound. Robinson, keeping with his individual style, infuses this performance with a strong spirituality. His resonant, chant- like refrains echo hypnotically and, despite the propulsive percussion, lead to extremely solemn moments.

Robinson also builds a dramatic ambiance which is both tense and playful. Keyboard phrases of different octaves echo one another at times and diverge from each other at others. These, often abstract, soundscapes float over the visceral vamps of effervescent drums. This results in a truly mesmerizing atmosphere and lyrical otherworldly poetry with a whimsical undercurrent. This charming recording closes on a nostalgic and bittersweet note; this conclusion comes as a natural progression of the entire piece and not as an afterthought.

Taffeta Patterns with its equally appealing cover art, also designed by Robinson, is a thoroughly enjoyable and satisfying album. It is yet another refreshingly novel addition to Robinson's one-of-a-kind creative output. Robinson's discography defies genreism and embraces multiple musical traditions. Once again Robinson has created an accessible work without sacrificing artistic quality, one that is original without being esoteric.