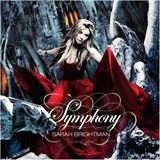 The vocal star of Cats, Phantom of the Opera and Requiem may be the former Mrs. Andrew Lloyd-Weber but this Symphony proves that Sarah Brightman will never leave epic melodrama too far behind. Brightman continues to satisfy both critics and her public by working through the crossroads of classic popular music, popular classical music, theatrical showtunes and—on this album, recorded across three different countries with her longtime producer Frank Peterson—evocative orchestral goth. "Over the past four years of recording this album, I find myself approaching my music even more visually than I ever have before," Brightman says. "I found that the canvas was endless for this album."

The first note you hear Brightman—in "Fleurs du Mal," after the "Gothica" orchestral prelude—she unleashes from on high an almost impossible note, a purely musical sound that seems more godly than human. There's little need for the choir's chorus because a voice this powerful needs no such backup. The title track makes this same point: One of this set's least overwrought and complicated arrangements gives her voice room to breathe into the lyrics gorgeous life (Her previous relationship with AL-W makes this chorus particularly poignant: "Symphony/ It's gone quiet around us now/ How I wish you would hold me/ And that you'd never told me/ That it's better if you leave"). Similarly, her voice ethereally moves like a spirit over the quiet, still waters of "Sanvean."

Symphony also features several Brightman duets. She reprises "Canta Della Terra" with Andre Bocelli, one of the few singers whose voice she cannot overpower, and beautifully renders "Sarai Qui" with Italian tenor Alessandro Safina. "Pasión" with countertenor Fernando Lima aches with longing yet twirls dashing and romantic, like a Spanish dancer. On "I Will Be With You (Where the Lost Ones Go)," Brightman teams with Paul Stanley, who herewith takes a gigantic leap forward in his quest to transform from badass Kiss lead guitarist to Cher impersonator. Someone—even if I'm not quite sure whom—should have known better than this.