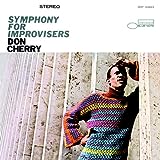 Exploding on the jazz scene in the late '50s as a member of Ornette Coleman's pioneering band, Don Cherry left the Coleman aggregation in '65 to pursue a solo career. This, his fifth date as a leader and his second album on Blue Note, was a continuation of the free jazz sonic explorations that made the Coleman band so groundbreaking. The thirty-year-old cornet and pocket trumpet player was beginning to step out from the long shadow of the controversial saxophonist.

Consisting of two movements of over nineteen minutes each, the reissued Symphony for Improvisers is a lesson in controlled chaos that remains eminently musical. The first movement consists of explosive music with Pharoah Sanders playing piccolo, while Gato Barbieri, Cherry, and Karl Berger let loose with a cacophony. Underpinning it all is the near-relentless polyrhythmic churning of drummer Ed Blackwell and the steady basses of Henry Grimes and JeanFrancois Jenny-Clark. The more musically varied second movement begins with a brief, mellow solo by Cherry. Things soon switch into high gear again with shotgun saxophone solos from Barbieri and Sanders, with other band members joining in the musical gala as they take the music to its conclusion, stopping on a dime.

This music is cerebral without being cold, freewheeling without degenerating into a lot of blowing for the sake of blowing. Never boring, Symphony for Improvisers is for jazz fans with lengthy attention spans and open ears.