BY KURT GOTTSCHALK
January 19, 2006
Sign in to view read count 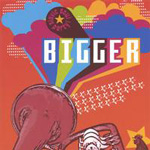 The music of the Roma—some of whom accept the "gypsy moniker and some of whom reject it—is often joyful, necessarily so. Like the American blues, gypsy music isn't about complaining so much as surviving despite. For even the biggest Balkan stars, the money gigs are weddings, which involve a week of ceremony and parties. A successful Balkan band needs not only to know the popular songs of the day, but also be able to carry a week of gigs for the same audience.

The Middle Eastern influences in New York's downtown have taken a different track—decidedly less secular and leaning more toward high art. But in that context, the twelve-member Slavic Soul Party! (which features Curtis Hasselbring, Matt Moran, Oscar Noriega, and Chris Speed) has captured something of the populist aspect of the music. This is a party band, maintaining a weekly residency at Barbès, a small club and now a record label in Brooklyn. Bigger is SSP's second release. The band tries to keep the party feel, with spoken snippets between tunes and a couple of crowd-pleasing requests (Lee Dorsey's "Ya-Ya and the Meters' "Look-ka Py Py ), along with some traditional folk tunes, less recognizable covers, and a handful of their own compositions.

But crowd pleasing works best with a crowd, and Slavic Soul Party! works best with a party, as was the case in November, when the musicians wound through the aisles of the crowded WFMU record fair, led by a belly dancer and barely able to make their way through the room. Bigger captures them well and will sound best in a living room filled with friends.

Shall I Throw It Down?; Missy Sa-Sa; Cacak Nirvana; Dance the Dust Up; Malina; Ya-Ya; Into the Night; 140; Curha 9/9; Bride's Song; Going Down, Looking Up; Rufalina; Down; Juan Colorado; Indinski; Look-Ka Py Py.