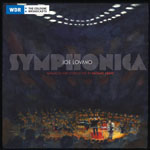 Sumptuous and cinematic, a retrospective with a spin, Symphonica is the first album saxophonist Joe Lovano has recorded in its entirety with a full symphony orchestra. Playing mainly tenor, he revisits six of his favorite original compositions (and Charles Mingus' "Duke Ellington's Sound Of Love"), written over the last 20 years, with the massed strings, woodwinds and brass of Cologne's WDR Radio Big Band and Orchestra.

By turns caressed and buoyed along by Michael Abene's gorgeous arrangements, Lovano is at his most unbuttoned and lyrical. Less an innovator than a celebrant and synthesist, his style—a well rounded compendium of decades of jazz saxophone history—here reveals a characteristically catholic mix of sources. Illinois Jacquet, Ike Quebec, Lester Young, Pharoah Sanders, Von Freeman, Stan Getz and (the sole alto among the tenors) Johnny Hodges, all make appearances. It's a roll around in love song to the saxophone.

Abene's style is also historically resonant. At times it touches on Leonard Bernstein's brassy, percussive exuberance—Abene received a 1998 Grammy nomination for his arrangement of "America" on Dave Grusin Presents West Side Story (Encoded Music, 1997)—at others it's reminiscent of Eddie Sauter's lush strings on Stan Getz's Focus (Verve, 1961). A friend of Lovano's since he played piano alongside him in the Mel Lewis Jazz Orchestra, Abene took over the WDR Big Band in 2003, when the idea for Symphonica was born.

The tunes Lovano asked Abene to arrange cover 12 years of his Blue Note history—opening with "Emperor Jones" from his label debut Landmarks (Blue Note, 1990), on to "The Dawn Of Time" from Oh! (Blue Note, 2002), a collaboration with guitarist John Scofield, bassist Dave Holland and drummer Al Foster. "His Dreams" goes back even further, written in 1987 on the passing of Lovano's father and mentor, tenor saxophonist Tony "Big T" Lovano.

The material spans ballads—"Emperor Jones," "Duke Ellington's Sound Of Love," "I'm All For You," in which Lovano plays with a breathy romanticism born in the swing-to-bop era—and robust, invigorating romps, notably including "Alexander The Great" and "The Dawn Of Time," which embrace blues-going-on-free (and back again), vocalized tones and multiphonics. Lovano is the chief soloist, but on the turbo-charged "Alexander The Great" he's joined in an extended solos and fours duel with WDR alto saxophonist Karolina Strassmayer, a raucous fellow spirit and a name, as they say, to watch out for.

Symphonica was recorded live at Cologne's Kohner Philharmonie concert hall during the second of a four night engagement in November, 2005 (one track, "His Dreams," was recorded in the WDR studio). It's totally wonderful. The only thing missing is a DVD.

Emperor Jones; Eternal Joy; Duke Ellington's Sound Of Love; Alexander The Great; His Dreams; The Dawn Of Time; I'm All For You.