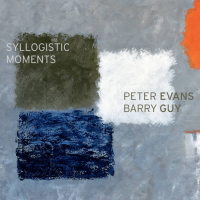 From the first few seconds of the opening "Red Green" onwards, this live recording from trumpeter Peter Evans and bassist Barry Guy is a feat of death defying bravura. The two are among the most utterly distinctive practitioners on their instruments and they create a fast evolving kaleidoscope of preposterous sounds. Evans named his record label More Is More and that credo is amply reflected in the density of ideas which scroll past in swift succession. Both go way beyond their instruments' supposed capabilities, though such virtuosity is worn lightly, and indeed there is an almost playful feel to their high velocity exchanges.

Over a lengthy career, Guy has ranged from classical Early Music ensembles to composition at the interface of contemporary new music, jazz and improvisation for the London Jazz Composers Orchestra and the Barry Guy New Orchestra, but it is his prowess as an improviser which is on display here. For his part Evans has pitted himself against an ever-widening swathe of collaborators in both North America and Europe, while at the same time affectionately dismantling the jazz tradition with his own groups and formerly as part of Mostly Other People Do the Killing. As such, the beginning of "Red Black" where he moves from a spluttered amalgam of trumpet and voice to subterranean growls with simultaneous upper register squeals gives just the merest hint of his scope.

Striking blends of timbre prove commonplace, as when Evans' percussive plosives are matched by Guy's jittery col legno tapping on "Green White," and then later in the same cut when the bassist's bowed whistle interweaves with the trumpeter's falsetto whinnies. But such momentary convergences are just the starting point for further interplay as they spin off at rapidly diverging tangents. Contrasts abound too, as at the start of "White Red" where Evans cycles through explosive snorts, buzzing sustains and steam locomotive puffing in opposition to Guy's resonant slurs. There are reflective moments too amid the blur, exemplified by the collision of vocal overtones and harmonics which leads to one of the most consonant passages on the disc later in "Red Black."

While the titles and cover might contain echoes of Mark Rothko's monumental canvases, the realization is more evocative of the action paintings of Jackson Pollock. The two musicians share characteristics such as the constant switches between extremes, the use of extended techniques, the capacity for split second adjustments in trajectory and the depth of listening and speed of response. But the most important commonality is the sheer musicality with which they deploy the sounds.