By John Kelman
September 26, 2012
Sign in to view read count 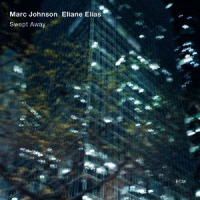 It's a relatively rare occasion when Marc Johnson releases an album under his own name, but based on the bassist's track record—from Bass Desires (ECM, 1985) through to Shades of Jade (ECM, 2005)—it's always one to celebrate. As Johnson fast approaches 60, it seems like only yesterday that he emerged as the bassist in Bill Evans' final trio in the late 1970s, before the piano legend's passing in 1980. But if time has passed, one thing that has remained constant is Johnson's ability (not unlike Evans) to balance power and elegance, yin and yang. Shades of Jade was, for some, the sleeper hit of 2005 and so it's great to find Johnson bringing back the core trio and saxophonist Joe Lovano (who also appeared on select tracks), though this time around he acknowledges the greater significance of pianist (and wife) Eliane Elias by putting her name up on the marquee, beside his own.

Elias assumes an even greater role this time around, with five compositional credits to Johnson's three, alongside two additional tracks co-composed by the couple and one traditional tune. Equally significant is a greater emphasis on Johnson and Elias, with just five tracks fleshed out to a quartet with Lovano, making Swept Away an inevitable successor to Shades while, at the same time, delivering something different. Like Shades, Swept Away takes its time to kick into higher gear, but when it does, the trio delivers on an energy only intimated on the previous recording's brighter numbers. Elias' opening title track is a lyrical ballad for the core trio, with Lovano joining for the subsequent "It's Time," a smoky, late night tune that capitalizes on the saxophonist's ability to get deep inside the pianist's soft yet supple changes, with Johnson and drummer Joey Baron providing similarly pliant but delicate support.

Things change, however, with Elias' modal "One Thousand and One Nights," another trio track that ramps up the tempo and the dynamic, with Johnson's deep, visceral tone and Baron's more vibrant pulse creating an unshakable foundation for Elias, whose extended solo hints at Middle Eastern tonalities while being equally suggestive of a Midwestern vibe that feels closer to Johnson's Nebraska roots than it does the pianist's Brazilian upbringing.

Johnson's first composition of the date, the indigo-tinged "When the Sun Comes Up," brings Lovano back, mirroring its title as the bassist slowly moves from dark-hued whole tones to more fervent swing with a stronger, quarter-note pulse. As the quartet picks up steam, Baron manages to combine responsive foil—first to Lovano and then to Elias—with a magical ability to suggest rather than actually play time, aligning with the more anchor-like Johnson.

The co-written tunes range from the gradually building, ultimately effervescent "Sirens of Titan" (another Lovano feature) to the penultimate tone poem, "Inside Her Shoe Box," featuring Johnson's evocative arco. Swept Away closes with Johnson delivering an a cappella version of "Shenandoah" that brings the album full circle. It's a masterful close to a recording that, with its references to both tradition and more spacious, open landscapes, should position Swept Away, like its predecessor, as this year's sleeper hit.