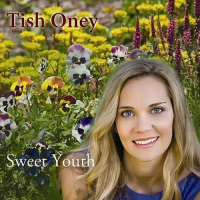 In previous offerings from singer Tish Oney, she surrounded herself in the trappings of traditionally sized jazz combos, but on Sweet Youth she eschews safety in numbers for the nowhere-to-hide texture of voice and guitar. This baker's dozen of standards and original songs dispels any doubts that the recently doctored Oney (University of Southern California, Jazz Studies) is better suited to academic settings rather than the recording studio. The artful playfulness of her scatting on several tunes (highlighted on "Waltz for Ellie") demonstrates a well-conceived sense of melodic improvisation while the soft ballads ("Sweet Youth") are a pleasant delight. And through them all, the tempo and groove are communicated by Oney's keen sense of phrasing that reveals a deep appreciation for the vocal jazz idiom. Although another soloist, such as saxophone or bass, would have injected timbral variety, their absence does not create a distraction that can't be offset by the clever arrangements and use of open space.

Special attention should also go to guitarist John Chiodini who, in the absence of any other instruments, wonderfully fills the role of both rhythm section and soloist. On songs like "Year Round Blues," the combination of improvised and prearranged interplay between the duo is effective and suggests an established level of comfort not always evident between a singer and accompanist. Other worthy highlights include the lyrical additions to "Alice in Wonderland" and the challenging tempo of "It Might As Well Be Spring," from Rodgers and Hammerstein.

Oney puts a strong stamp of identity on Sweet Youth by not only singing throughout, but by writing more than half of the material, and producing the album. On each of those levels Oney has excelled to deliver a CD that stands clearly above the fray of independent releases and will serve her well as she further develops a deserved national reputation.

'Tis Autumn; September in the Rain; Year Round Blues; Sweet Youth; Hidden Soul; Alice in Wonderland; I Want You; Autumn Nocturne; Waltz for Ellie; In the Back of My Mind; Lonely Evening; It Might As Well Be Spring; Ask, Seek, Knock.