By John Barron
September 1, 2007
Sign in to view read count 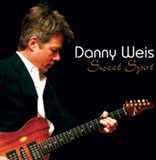 Guitarist Danny Weis is something of a rock legend. The Toronto-based guitarist co-founded the classic rock group Iron Butterfly in San Diego in 1963 and then went on to work with legendary 1960s band Rhinoceros. On Sweet Spot, his first ever solo release, Weis explores the sounds of smooth jazz and instrumental rock on a set of well-crafted original tunes and a couple of standards.

Weis covers a large gamut of guitar styles on Sweet Spot, including clean-toned smooth jazz, R&B, funk, solo chord-melody jazz and hard hitting rock. While adept at each musical turn, the acrobatic guitarist is at his best on the fuzzed-out, heavy rock grooves of "Turn it Up, "Graham Street Shuffle, "Inglewood and "Gunslinger. Wisely using distortion to emphasize his lyrical message, Weis exercises a patient approach to phrasing without getting caught up in nonsensical convoluted bashing that is so common in players of less experience.

The use of a live rhythm section and horns throughout the session—a missing element from so much of the banal smooth jazz being released—adds an energetic spark, and a retro flair, to the proceedings. The extremely versatile rhythm duo of bassist Rich Brown and drummer Jorn Andersen lay down some tight, nasty grooves. Lou Pomanti and Michael Fonfara trade off on piano and Hammond B3, creating a greasy soul vibe, especially on "It's About Time and "Keep the Faith.

What makes Sweet Spot intriguing is the accessible nature found in the composing, coupled with solid performances. Weis demonstrates versatility, taste and an uncompromising love for the guitar.

Sweet Spot; Turn It Up; Cat's Meow; Country Licks (Interlude); Angel's Flight; Apricot Brandy (Interlude); Graham Street Shuffle; What Would It Take; Funk Tracks; Inglewood; East Of The Sun; Dinner At Nine; It's About Time; Gunslinger; Somewhere Over The Rainbow; Keep The Faith.