By JAKOB BAEKGAARD
September 3, 2018
Sign in to view read count 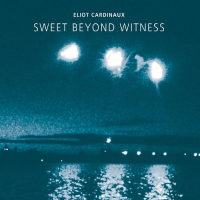 These days words seem to narrow the world instead of making it wide. Short, simple statements are floating around, just as quickly read as they are forgotten. Poetry is not an alternative to everyday language, but it provides a necessary supplement that reminds us that humans are complex beings—not just customers whose behavior and psychology can be predicted by clicks. A space is needed where complex emotions can be expressed in a language beyond binary limitations. Poet, pianist and multimedia artist, Eliot Cardinaux, gives the gift of such a space on his album Sweet Beyond Witness.

Like the romantic poet John Keats, Cardinaux is in search of beauty, but it is the kind that is able to contain opposites: joy and sadness, creation and destruction or mercy and shame as it is formulated in the opening poem "Lately," so striking that it is worth quoting verbatim: "Lately the sun went down, / all thankfulness aglow, all shame / in dusk's hunger vanishing. // Soon the moon went up, / the cages rattled and were lifted -/ like your hand upon the book. // While they howled at your mercy / we were little white lanterns / gone out around the brook, // and given these things, / all thankfulness aglow, all shame / in dusk's hunger vanishing."

The scene with the moon is a poetic cliché, but it is twisted beyond recognition. In between the opposites of sun and moon, freedom and cage, shame and mercy, something new happens. It is a third space that is also reflected in the changing pronouns that shift the perspective, just as the movement changes from concrete landscape (the sun went down) to abstract emotion (thankfulness aglow) and image (cage) to simile (like your hand upon the book) and metaphor (we were little white lanterns). Language is not only changing meaning, it is also shifting sound and sound is music. A title like "Dada" is a keen reminder of how the Dadaists could boil letters down to pure sound. Here, words and piano complement each other without the radical destruction of dada while "Y'dob T'fird" is an enchanting veil of words. Eliot's way of working with surprising word constellations also owes something to surrealism, but the influence of French philosopher Gilles Deleuze and the idea of the fold is also felt and addressed as an inspiration.

Eliot's poetry cannot be translated into a simple statement, but rather portrays a movement that is both natural, physical, literary and psychological, just as a complex landscape that is seen through the eyes of a human. In the same way that the words transform, the form changes organically in a multimedia landscape. The album changes between Eliot's poignant recitation and Thelonious Monk-like piano blocks of beauty, with the crystalline ballad "Reflections" being a highlight, but the piano can also emit the raw sound of dangling strings and walk with heavy feet. The album is complemented by the release of a chapbook that includes the poetry and writings about music, but there is also a visual component with videos. Eliot is indeed experimenting, but the heart of the project remains the poetry and the music and it is, to quote the title, sweet beyond witness.