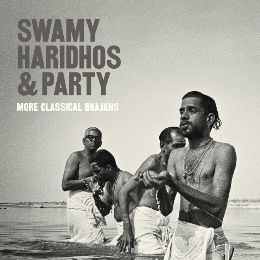 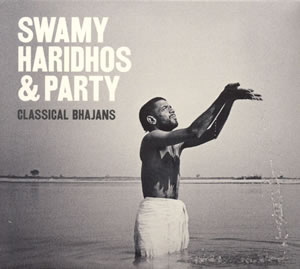 It is impossible to traverse the ocean of Indian music in one go. First there is the thriving classical music tradition that keeps the ancient collection of ragas alive. Then there is the burgeoning tradition of popular film songs, and the poetry and song tradition of ghazals, both of which sometimes use ragas as the musical basis for composition. Then there is the line—albeit blurred—between Indian secular and religious music. Then too there is the Vindhya mountain range, which slices the country into an imaginary half and so doubles the number of musical traditions between the northern, "Hindustani," and southern, "Carnatic," systems; these can be hugely disparate in terms of modes and instrumentation, and therefore melody and rhythm as well. And that is just a simplistic version of the state of the art in this mysterious and magical country.

Classical Bhajans by the late Swamy Haridhos and his ensemble falls into the category of religious or devotional music that rides a wave comprising classical traditions and the Indian strand of Sufism that has been prevalent in India probably around the time that the revealed body of texts started off the Vedic Age somewhere within the realm of 1500 to 1000 BC. The bhajans themselves have no fixed form; some are based on forms as simple as the kirtan or mantra, and there are others that have their basis in classical ragas and talas, or rhythmic cycles, that are maddeningly, yet delightfully complex. Yet it is this complexity in the music that is so alluring.

Swamy Haridhos, a Vaishnava devotee who founded an ashram in a Southern Indian city not far from Madras, conceives and sings in the Dakshina Bharatha Sampradaya Bhajan tradition of Southern India. The word "Sampradaya" comes from Sanskrit and means "that which is handed down by the ancestors," and so it follows that Haridhos came from a long line of devotees which began with Sri Marudhanallur Sadguru Swamigal, who created these bhajans—a collection of kirtans and namavalis or songs composed to celebrate gods such as Lord Ram. This in fact begins the collection of bhajans that were sung at a concert in Bombay, in 1968, when they were recorded. Although they may have been sung in a myriad of improvisations, scores of times, this is the only known recording of these bhajans, which makes this superb record something of a rarity too.

This collection of devotional songs is magnificent. Set against the hypnotic backdrop of the drone of the harmonium (an instrument derived from the accordion), played with authority by Muthunathesa Bhagvatar, and the electrifying waves of the violin played by the prodigiously talented (and then school-going) youth, K. Shivakumar, the bhajans ebb and flow and swell like an ocean stirred up by the hand of god. These vary in length and rhythmic subtlety, from the intricate and short flash of the "Mandare Mulé," which is just 44 seconds long, to the grand version of "Gurumurthi Pada Mulé," which clocks in at approaching nine minutes. However, all of the bhajans and invocations are linked, one to another, like a glowing umbilical cord.

There are glorious inflections and vocalistics in between, and the call and response form of some of the bhajans seems to have fired up Haridhos to such an extent that the dramatic swell in the volume and accents of his narrative creates a dynamic tension within some songs, such as "Saranu Saranu" and the wondrous dedications to the legendary mystics, Mirabai and Saint Tukaram, which feature their compositions, "Mori Laga Lagana" and "Sadguru Vachony." The excitement comes to a head in compositions such as "Madhava Bhavatu Te" and "Namavali Gangadhara," which begin in the primordial rhythmic cycle of adi tala, which is in 32/4 meter, but soon multiplies exponentially to 64/4 beats. This rhythm showcases the polyrhythmic sophistication of Indian music, which is one of the main reasons that the discipline draws so many devotees from the West—especially musicians, from the late Beatle, George Harrison, to the living tenor saxophone legend, Sonny Rollins.

Tragically, yet rather magically, Swamy Haridhos disappeared into the river Ganges on an ill-fated expedition into the Himalayas in 1994, and so did not live to repeat this extraordinary musical journey, especially his performance of the classical raga "Bhairavi" that spans three tracks here. But his legend will live on through this album. It is, without equivocation, one of the finest field recordings to be released by the Swedish label Country & Eastern, and its success is largely due to the efforts of Bengt Berger, C&E's founder , a favored accompanist of multi-instrumentalist Don Cherry and one of Europe's premier percussionists.