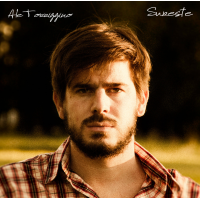 When it comes to blues, folk-rock and Americana, one may not necessarily think of South America. Such is the stereotype many in the West can place upon other non English speaking countries who think that it is only in England and North America where musicians are truly qualified to add to the great American songbook. But 27 year old singer-songwriter Alejandro Torriggino has managed to successfully break down those preconceptions on his debut Sureste (or Southeast), an album fraught with heartache and reflection.

Born in Patagonia, Argentina, and now currently residing in Rosario, Alejandro first took drumming and guitar lessons in his teens, before writing songs at the age of Seventeen. He put together and played in a number of local bands before finally meeting Gonzalo Esteybar in 2015, an indie record producer perhaps best known for his project "Once Guitars," an all acoustic guitar quartet. When the largely self taught singer-songwriter presented to Gonzalo some of his material, the producer was so impressed that he offered him the chance to record his first album, which is what we have here. Alejandro himself described the approach to making the record: "It features a very organic sound, since I was looking for that warmer palette on the analogue instruments." And it is that warm palette which permeates throughout Sureste, an album rich with autumnal expression and mellow textures.

Opening track "Tengo que salir de esta ciudad" is a reflective piece, with plenty of teary pedal steel and melodious strumming. "Roca" is a little more upbeat, in terms of rhythm, but full of thoughtful observations all the same. The atmospheric "Aves de Invierno" (winter birds) has the potential to lull the listener into a state of dream, with its lap steel guitar and soft cloud-like strings, while "Vas a llover para mi?" and "Fuego y cenizas" are both drifty ballads worthy of the early '70s Laurel Canyon scene.

On "Siempre serás la Misma" Torriggino reminds this listener of an Argentinean Ryan Adams, and is another delicate number, with a lovely melody and gorgeous piano. "Dónde estás esta noche?" has our troubled troubadour wondering where his lover is, before increasing the tempo (slightly) on "Paula," a song which has an almost pop-rock feel to it, albeit with a somewhat Latin flavour. The sentimental "Viejos cofres" (old chests) is Ryan Adams meets Harvest era Neil Young, followed by what is indeed a very long and sad goodbye with "Largo y triste adios," a mournful tune but not one without a sense of hope it seems. Certainly there is much tenderness and empathy in the playing throughout, enough to recommend it to this critic's playlist.

For fans of Ryan Adams, Ray LaMontagne, and '70s acoustic folk-rock in general, Alejandro Torriggino is unlikely to disappoint. Sureste was clearly an organic production from start to finish, which makes for a refreshing change in this computer age where so much of our popular music has been compressed to ones and zeros. Therefore how reassuring it is to know that there are still those amongst the digital dead, whose ambition is merely to create something far more real and tangible.