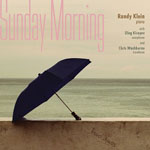 Certain things, whether intentional or not, are suggested with an album title like Sunday Morning. A placid, gentle aura to the dawn of this day of rest is often ascribed. While jazz created with this image in mind could mean bland music for coffee sipping, pianist Randy Klein shows that it doesn't have to be that way. Klein covers a wide range of musical possibilities, demonstrating his masterful mood-setting skills throughout this collection of duo recordings. Trombonist Chris Washburne and tenor saxophonist Oleg Kireyev join him for six tracks each that, while carrying a gentle and leisurely weekend attitude, are never boring.

Klein's two duo partners couldn't be more different in terms of sound conception—Washburne demonstrates a big, wide sound, while Kireyev possesses a breathy and alluring tonal quality—and this works in the pianist's favor. A stylistic dichotomy is also immediately noticeable at the start of the album, but things end on more similar ground by the close of the set. The opening "Hiding Out" features Washburne's blustery tone and Klein's playful piano work—the two finishing each other's sentences as the music coalesces—eventually developing into an enjoyable, swing-based conversation. Kireyev is sly and seductive as he works over Klein's tango-influenced piano on "Truly Yours." Swing is the thing, once again, when Washburne returns for "I Caught You In A Lie," but a more consistent rhythmic feel underscores the trombonist's second appearance. On the title track, Klein's semi-staccato, straight-eighth notes have a grounding effect, as Kireyev paints long lines over the piano at the tune's outset. As the music evolves, Kireyev's playing takes on greater rhythmic intensity and the pair becomes far more interactive.

As the album progresses, Washburne's softer side emerges. Followng the frisky "Doo Boo Bop"—set off by three-note licks from Washburne and some wonderful duo-logue between piano and trombone-Washburne's tenderness comes through on later tracks like "Petit Pois" and "Her Beautiful Soul." While his sound remains robust, this full-bodied brassiness is something to behold as he gorgeously shapes his lines throughout. Kireyev delivers some elegant swing with "I've Got An Itch" and, on the album closer, reaches a state of gentle contentment with "Fly Free."

Whether taking the spotlight, sharing it with his duo partners or providing some supportive piano work, Klein's performance is first-rate throughout Sunday Morning's twelve musical musings.

Hiding Out; Truly Yours; I Caught You In A Lie; Sunday Morning; Doo Boo Bop; Now I Onder; House On The Hill; I've Got An Itch; Petit Pois; Lottery Day; Her Beautiful Soul; Fly Free.