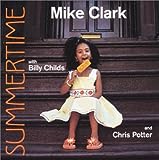 It's safe to say that drummer Mike Clark is most commonly associated with funk. Since his days as a member of Herbie Hancock's legendary Headhunters, Clark has been considered one of the foremost trapsmen of the genre. But funk is only a small part of what this veteran artist is capable of, and Summertime may finally spell the end to this unfortunate pigeonholing.

As evidenced by his appearance last month at the Blue Note, Clark is every bit as comfortable playing straight-ahead jazz as he is mining the deepest of grooves. In fact, an examination of his on- stage persona would lead most to conclude that Clark approaches all musical endeavors, great and small, with the same force of swing. Summertime is no exception, as the drummer propels a formidable combo - including reedmen Chris Potter and Bob Sheppard, pianist Billy Childs, and Clark's long- time associate, trumpeter Jack Walrath - through nine airy tracks, covering a broad slice of the jazz canon. Among the standouts are Jeff Pittson's up-tempo opener, "Brujo," the charismatic Ellington rarity "Angelica," and Wayne Shorter's classic "Fee Fi Fo Fum," compelled in no small part by Sheppard's virile tenor licks. Also worthy of mention is Childs' often exceptional work at the keys. His solos on "Brujo" and "Prince of Darkness" are particularly captivating, and his thoughtful comps hit the mark throughout.

Clark exhibits a versatility rarely associated with him. Not only does he keep solid time and provide strong, focused solos, but his coloring and accents are equally dynamic. Press rolls, rim shots, nudges, curls, pops, probes, delicate caresses and sundrous booms are all part of his greater arsenal, and each can be unleashed by the slightest of whims.

So forget the funk for now and let the venerable Mike Clark engage you with his lesser-known jazz riffs.