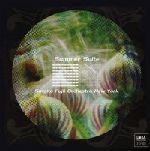 Continuing the stream of recordings in her 50th birthday year, pianist Satoko Fujii presents Summer Suite from the New York big band, as well as Sanrei (BKM, 2008) from the Nagoya band. These two are in a series of thirteen big band releases dating back to Jo (Buzz, 1999)—besides the forty-odd other recordings she has lead or played on. You do the math.

Fujii is a complete modernist, bound by no rules, eclectic in predilections and influences, and yet with a strong romantic streak that is closely tied to her perceptions and inspirations of nature. While this connection can be seen by the titles of many of her compositions, many times their sound is surprisingly not pastoral and as far away from the sound of someone like Maria Schneider as can be imagined.

In Summer Suite, the New York band swaggers confidently, in both the scored sections as well as the solos, through the title tune which lasts just over thirty-nine minutes. The sound, anchored by bassist Stomu Takeishi and drummer Aaron Alexander, feels closely related to Fujii's "rock" quartet in its rhythmic power and intense electric bass bottom as heard in Bacchus (Muzak, 2007).

The music opens with the feeling of nature awakening, produced by many different independent threads including a heroic line—played in unison by much of the band—interjected in rubato time. This eventually becomes the theme played in varying speeds, pushed by a coalesced rhythm section. The piece develops organically and has some glorious free sax and trombone soloing, supported by a growling bass and slashing drums. The theme reappears a few times and provides a skeleton on which the music is built. This is wonderful music, making its length completely arbitrary.

"Sanrei" continues the heroic mood, with brilliant brass choirs answering a theme that manages to be simultaneously bluesy and oriental. Played very much behind the beat and contrasting with strict drums and more growling bass, the theme is taken far afield by the soloists. Nine minutes of glorious music.

Bacchus is actually referenced by "In The Town You Don't See On The Map," which is very recognizable by its jaunty bass vamp. How Fujii adjusts her music to the differing forces, in her quartet and big band, can be easily heard with the two versions.

While the logistics of coordination for both rehearsal and recording must be extremely daunting for a big band, Fujii pulls it off with an ease that is almost shocking. That the New York band enjoys playing her music is audible throughout Summer Suite, and a live performance would border on the ecstatic.

Summer Suite; Sanrei; In The Town You Don't See On The Map.