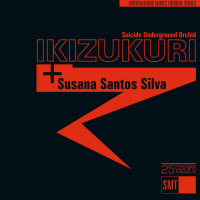 For its second album, the power trio Ikizukuri, comprising German saxophonist Julius Gabriel, Portuguese electric bassist Gonçalo Almeida and drummer Gustavo Costa, joins forces with trumpeter Susana Santos Silva for a brash 40-minute thrash blending free jazz, noise, metal and electronics. While the band's name refers to a gruesome strand of Japanese cuisine which entails seafood so fresh it is still alive, the shock and vitality are happily the only ingredients which inform the music.

The album was recorded in Porto at Sonoscopia, a space for artists involved in the experimental, improvised and electro-acoustic fields. The post production of Costa plays a significant role in the final product, warping, manipulating and blurring sources to bring an electronic ambience to most of the six cuts. On the opening track, "Kindhearted Part Wrestle," Almeida's seesawing bass growl submits to a wall of scratchy distorted beats in an iconoclastic start, ramped up even further by the molten horn interjections, as soprano saxophone and trumpet intertwine in sinuous exchanges of multiphonic judders and wailing skronk.

That take-no-prisoners attitude permeates the rest of the session too. With their tandem sparring, Gabriel and Santos Silva predominantly add color and texture to the scuzzy energy, although they enjoy an interlude of heavily reverberating staccato exclamations on the menacing "Wealth, To The Poison In The Wash" (all the track and album titles suggest a random word generator), and approach ballad territory on the comparatively unadorned and laid back "I A An Failures." But this is not the place to look for the subtlety which distinguishes Santos Silva's free improvisatory adventures or Gabriel's contribution to Barry Guy's Blue Shroud Band.

Elsewhere the electronic treatments loom large, at their most extreme transforming everything into glitchy beeps and squiggles part way through the motorific "The And Flesh His Resources." Here both soprano saxophone and trumpet sound as if they are channeling Bitches Brew-era Miles Davis via the wah-wah pedal and, indeed, this album will be catnip to those who relish a contemporary take on such genre-colliding fusion.

Kindhearted Part Wrestle; Wealth, To The Poison In The Wash; Goldfish Tooth Variable; In The We Some, No S Can Though; I A An Failures; The And Flesh His Resources.