By Troy Collins
February 26, 2008
Sign in to view read count 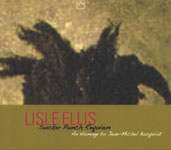 With ties across Canada, New York City and the Bay Area, Ellis has been a highly valued collaborator for almost three decades. A brief hiatus from performing in the late 1990s found him channeling his creative energies into painting and electronic composition. After spending the majority of his professional career in California, Ellis relocated to New York City in 2005, when he began composing a requiem for Basquiat as a "gesture of respect and gratitude."

Using the Roman Catholic Church's six part mass for the dead as a guide, Ellis staggers recurrent motifs and concise transitory themes with multi-sectional compositions. Alternating between melancholy impressionism and bittersweet euphony, the suite encompasses a range of emotions. By shifting instrumental emphasis between brief electronic sketches and heavily arranged acoustic tunes, he exposes layers beneath the surface of the overall work.

Legends of the Loft Jazz era, saxophonist Oliver Lake and trombonist George Lewis supply the album's most heated exchanges. The episodic, suite-like "For Blues and Other Spells" and dramatically expansive "Untitled (Life Stilled)," find the duo embroiled in turbulent discourse, their interplay fearsome and uncompromising.

A diverse stylist, Lake pairs well with Hoffman, offering plaintive keening and thorny spirals on the boppish "Las Pulgas" in solidarity with her pithy interjections. With his plangent alto, Lake's presence transforms the electronic "Incantation and Ascent" into an acoustic lament, his incisive commentary on the turbulent "Bas Relief" providing drive and focus.