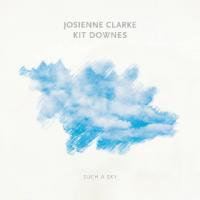 Sometimes life's great pleasures creep up almost unnoticed. One day they're not there, next day it seems like they've been around forever. Such A Sky is one such pleasure. A five-track EP, it's the debut release from BBC Folk Award winning singer Josienne Clarke and Mercury Prize nominated keyboardist Kit Downes.

Clarke announced the release of Such A Sky on her Twitter feed with a lovely lack of hyperbole: "I've made a little EP with pianoer Kit Downes we've only made 500 and you can buy it now." Damned by faint self-congratulation? Unlikely— Such A Sky may be short, but the quality is exceptionally high.

Such A Sky features three Clarke/Downes originals along with two reinterpretations. All five benefit from the duo's minimalist and unhurried approach, the mix of vocals and keyboards always given plenty of space. "Do Not Delay" is an interpretation of Mozart's aria "Deh Vieni Non Tardar." Clarke's plaintive vocal and Downes' sympathetic keyboard gives it a timeless aura, a feeling that it could have been written 500 years ago or yesterday. The duo's take on Lionel Bart's "Who Will Buy" highlights the despair that underlines the singer's plea.

Downes has said that Clarke ..."can sing a Michael Jackson song or a Dowland lute ballad and give them the same feeling." She writes lyrics that are strong on imagery, sometimes clear and precise at other times more opaque and mysterious. It's a quality shared with one of Britain's finest singers and songwriters, the great Lal Waterson. "Lines and letters promising to never be untrue, like a message in a bottle that will never, ever get to you. Instead, unread it sails off into the blue" she sings on the exquisite "Out Of View": Downes follows with a piano figure that readily evokes that lost, bobbing, bottle—the song ends with Clarke's quirky, swooping, vocal harmonies. The enigmatic "Beyond The Green" is filled with superb lines—"So I willed these walls to weeping and all their worries came undone..." is a personal favorite, but there are plenty more and once again Downes (on piano and harmonium) heightens their impact.

Downes closes Such A Sky with a brief, slightly spooky, coda on "Undo" that harks back to his church organ and saxophone duo work with Tom Challenger. The Clarke/Downes partnership ventures into different territory, creating its own world of rich harmonies, striking images and beautifully-crafted songs.

Out Of View; Beyond The Green; Who Will Buy; Do Not Delay; Undo.