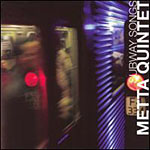 Songs about trains have always been a part of the jazz lexicon. Billy Strayhorn's "Take The A Train was an early tribute to New York's 8th Avenue subway line, but its seems a while since the city's much maligned mass transit system has been honored in music. On Subway Songs the Metta Quintet presents a program of nine original tracks "inspired by the many facets of the New York City Subway experience. The group, the resident ensemble of JazzReach, a not-for-profit performing arts and education association, is comprised of Marcus Strickland and Mark Gross (saxophones), Helen Sung (piano), Joshua Ginsburg (bass) and H. Benjamin Schuman (drums), the organization's founder and artistic director. The tunes, tastefully tied together by "sound effects —train noises, conductor announcements, a panhandler—are, like subway travel itself, varied in tempo and mood.`

The set begins and ends with the collaborative Gross-Schuman compositions, "Morning Rush (stand clear of the closing doors) and "Evening Rush, variations on the same theme that portray a somewhat tense energy-charged commute to work and the more leisurely trip home. In between, songs like Sung's straight-ahead swinging "Fast Forward and Strickland's enigmatic "Ephemeral Muse (spotlighting the composer's bass clarinet) maintain the roller coaster range of emotions. Selections penned by three of the group's contemporaries associated with JazzReach contribute to further the compositional variety of the date. Myron Walden's shadowy "Underground and Jimmy Greene's thoughtful "Underground Messenger make use of subtle saxophone harmonies that showcase the quintet's two horn front line, as does the disc's centerpiece, Jon Cowherd's episodic "Subway Suite. While the overall mood of the music making up Subway Songs may not be as visceral as one might expect from its title subject, its beauty is a moving tribute to a system that serves people from all walks of life.