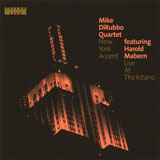 Despite its ever increasing international character, a good deal of the greatest jazz—particularly that performed in Manhattan clubs—is still played with a decidedly New York accent. The sound of the city is an urgent one—its tone dark, its rhythm intense. Saxophonist Mike DiRubbo speaks this language articulately, with a voice that clearly hearkens to his heroes, but is easily recognizable as his own. On this live date, leading a quartet—with an incendiary rhythm section of veteran pianist Harold Mabern and the indomitable bass and drum team of Dwayne Burno and Tony Reedus—through a swinging set at The Kitano, the altoist proves that he has few peers on his instrument in this idiom.

The disc's seven song set, comprised of four originals, a couple of classics and a hip arrangement of a contemporary pop standard, serves up the kind of well-balanced menu of mainstream jazz that one would hope to hear on a night out in one of the city's jazz rooms. The leader's writing is as impressive as his playing. His opening "Clarity is an original take on familiar Trane changes that reflects the inspiration of the tenor master, as well as that of the late Jackie McLean—DiRubbo's mentor and primary influence— while his "The Sage shows the saxophonist's increasing facility on soprano and the impact of Wayne Shorter on his composing. On "New Year's Dream, one of the date's high points, DiRubbo reveals an affinity for the sound of Pharoah Sanders that helps make his sound so unique among today's hard-boppers.

On the Ray Brown/Gil Fuller bebop classic "Ray's Idea, DiRubbo digs deep into his roots and demonstrates his inventiveness and ability to remain lyrical, even when improvising on up-tempos. His lyricism is further showcased on the ballad feature, Duke's "Prelude To A Kiss. Billy Joel's "She's Always A Woman seems like an unlikely piece of pop for a jazz record, but the quartet's time shifting arrangement shows it to be an excellent vehicle for some smoking solos. The closing "Better Days is a powerfully optimistic anthem that again shows the leader's promise as an important young composer. The rhythm section, which plays magnificently throughout, pulls out all the stops on this one and propels the saxophonist to some of the date's greatest heights—imposing ones that should help elevate DiRubbo's under-recognized stature.