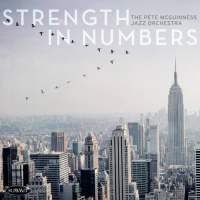 For the second album as leader of his jazz orchestra, New York-based Pete McGuinness says he has "returned to [his] roots," fashioning a series of dapper themes that embody his forward-looking point of view while swinging in the grand tradition of such legendary ensembles as Basie, Herman, Thad Jones and others. When someone like Bill Holman says (as he does) "wonderful writing," the tendency is to sit up and take notice. One keynote that's immediately clear is that Holman is, as usual, spot on, and that McGuinness ranks high among the jazz world's most skillful contemporary composer / arrangers, one who doubles on trombone and trebles as band singer (more about that anon).

Without sacrificing any of his deeply personal convictions, McGuinness has managed to produce an album that should appeal to those who savor music that is shrewd and sophisticated as well as to others who lean toward buoyancy and power. That's no easy task, and there aren't many bands or bandleaders who could make it work. McGuinness does so by blending big-band dynamism with structural finesse, as on his engaging bows to Basie ("The Swagger"), Jones ("Nasty Blues") and especially friend and mentor Bob Brookmeyer ("The Send-Off"). His deft use of harmony and color is everywhere exceptional. Among the other highlights is McGuinness' clever arrangement of Stephen Foster's ballad "Beautiful Dreamer," recast as a snappy samba that underscores intrepid solos by soprano saxophonist Dave Pietro and pianist Mike Holober.

McGuinness wrote the lyrical "Trixie's Little Girl" for his late mother, the Latin-tempered "Spellbound" as an homage (no kidding) to Claude Debussy and Billy Strayhorn. McGuinness' expressive trombone is showcased on the graceful "Bittersweet," as it is on "Trixie's Little Girl." Other soloists (all splendid) are trombonists Mark Patterson and Matt Haviland, tenors Tom Christensen and Jason Rigby, baritone Dave Reikenberg, bass trombonist Jeff Nelson, alto Marc Phaneuf, trumpeters Chris Rogers and Bill Mobley, bassist Andy Eulau and drummer Scott Neumann. The three remaining numbers (or two, as the standard "You Don't Know What Love Is" is repeated in a shorter "radio version") are the ones on which McGuinness sings, and the most courteous observation that can be made is that one of the perks of leading a big band is that you can sing if you want to and no one will demur. That's not to say that you should. Aside from those minor missteps, however, Strength in Numbers is entirely pleasurable and persuasive.