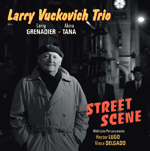 From the vibrant history of New York's 52nd Street to the spirited boulevard performance of a New Orleans marching band, the street sounds of jazz have been a celebration of life. This heartfelt exuberance can also be heard on this release by West Coast pianist Larry Vuckovich.

With an impressive musical career that has flourished since coming to San Francisco in 1951, Vuckovich has performed with countless artists and has produced a number of noteworthy releases, including Reunion (Tetrachord Music, 2004), with jazz vocalist Jon Hendricks. Street Scenes finds the veteran leader of large and small ensembles in a trio setting with the sure-fire guns of bassist Larry Grenadier and drummer Akira Tana, and it's clear he's still got the juice.

A mix of originals and covers make up this delightful set. There's the jump-jiving "Dexter's Mode, swinging proudly as the instruments trade fervent solos. The title piece has a cinematic quality that is drenched in the blues; on the hip "News for Lulu, the trio digs deep into the pocket. Vuckovich also draws from his Latin wellspring on "As Time Goes By Mambo and "Oh, You Crazy Moon, both stitched with lovely piano work and percussion. There are also two solo pieces, including an emotive reading of Miles Davis' "Blue in Green.

"Blue Bohemia Suite is the nucleus of Vuckovich's voice, covering the roots of his homeland in Yugoslavia, as well as branches of his knowledge of bop, classical and world music. The piece not only features the pianist's broad range but also Grenadier and Tana's, as they provide wonderful solos along with two guest musicians, Hector Lugo (congas) and Vince Delgado (Egyptian tabla).

Vuckovich's career has been marked not only by his swinging and graceful tendencies, but also consistency. After this many releases it might have been easy for him to fall into a repetitious, reliable humdrum, but the high level of musicianship and performance on Street Scene makes it a highly enjoyable straight-ahead recording.