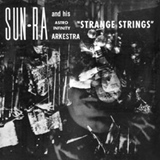 Emblematic of its title, this is one of the most unusual albums in the vast discography of visionary bandleader Sun Ra. In league with such classics as Heliocentric Worlds (ESP, 1965), The Magic City (Evidence, 1965) and Atlantis (Evidence, 1967), this obscure session focuses on similarly intense long-form improvisations. Originally recorded in 1966, Strange Strings is the culmination of Ra's most otherworldly experiments.

Pre-dating the comprovisations of Butch Morris and the game pieces of John Zorn, this is a classic example of Ra's conduction methods. With no rehearsal beforehand, ("a study in ignorance," Ra told his musicians) the results are surprisingly structured and spaciously uncluttered.

The only Sun Ra album of its kind, the title track and "Strange Strange" feature the entire Arkestra playing stringed instruments; ukuleles, banjos, mandolins, kotos, koras and more. In addition to the array of exotic strings, the ensemble features Art Jenkins uttering reverb-drenched mutterings, a huge sheet of tempered metal used as percussion, and a heady dose of intermittent reverb infiltrating everything.

"Strange Strings" and "Strange Strange" reverberate with dissonant texture and percussive clatter; the Arkestra eschews horns entirely, using the thrift store strings Ra acquired for them instead. Far less accessible than the opening tune, there is still a definite sense of episodic logic to these pieces. Similar instrumental groupings materialize with regularity, spurring on subtle shifts in sound. Punctuated by Jarvis' explosive percussion tirades, Ra's directorial hand in the proceedings is obvious.

Previously unissued, "Door Squeak" was recorded a year later. As the title suggests, it features Sun Ra playing a door with a squeaky hinge, accompanied by members of the Arkestra playing string instruments. Quieter, but similar to the previous cuts, it exudes a sparse alien sound-scape with Ra's hinge sounding uncannily Moog-like as it descends in pitch.

An anomaly even in the wildly unconventional discography of Sun Ra, this is a revealing listen for those interested in the furthest reaches of experimental music. For those unafraid to take the trip, Strange Strings will definitely take you places you have never been.