By Troy Collins
January 2, 2007
Sign in to view read count 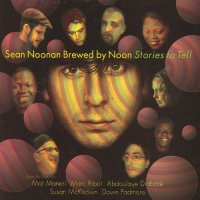 With a self-released session from 2005 to its credit, Noonan's original lineup is joined by a number of high-profile guest musicians on this sophomore effort. Downtown icons like guitarist Marc Ribot, violist Mat Maneri and percussionist Jim Pugliese supply passionate performances to an already assertive set.

Songs like "Esspi" and "Urban Mbalax" bounce along with an Africanized lilt, buoyed by Abdoulaye Diabate's impassioned griot vocals. Conversely, "No Strings Attached" and "Dr. Sleepytime" exude atmospheric, pensive blues, with understated contributions from Mat Maneri and Marc Ribot. Other tunes, like "Scabies" and "NY," revel in caterwauling guitars unleashing waves of distortion and feedback over angular rhythms. Blending ethnic polyrhythms with No Wave noise and robotic Downtown funk, Noonan has tapped into a sub-genre with roots that run deep in the Lower East Side.

The interlocking guitars of Marc Ribot, Jon Madof and Aram Bajakian parry and feint with fervent intensity across the album. Occasionally this torrent of screaming distortion invokes overwrought stadium rock excess. Sometimes enthralling, at other times a bit overwhelming, the visceral charms of such force are undeniable.

Other than a few slight missteps, such as a clumsy merger of late-night funk and electronic percussion on the metaphorical love song "Pineapple," the majority of Stories to Tell is a compelling listen. It may sound schizophrenic on first spin, but on subsequent rounds one can hear a developing artist finding his voice. Expect to hear more from Noonan in the future.