By Jeff Dayton-Johnson
July 8, 2007
Sign in to view read count 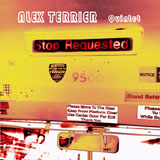 Saxophonist George Garzone has high praise for his protégé Alex Terrier, and indeed the young saxophonist exhibits many of the same qualities associated with his one-time teacher: a compelling logic in the construction of his long solos accompanied by a ready recourse to the outer reaches of the vocabulary that both players have inherited from John Coltrane. That Garzone himself is part of the quintet on five of the nine tracks of Terrier's début is welcome news, even if it's not always clear who's soloing. The liner notes duly spell out who plays which saxophone on each track, but even this level of information cannot answer all your questions; both players trade phrases on soprano on Garzone's "There's Snow Place Like Home," and it's a challenge to determine who's who.

The band seems to be having an especially good time on "Green Dolphin Street." Firmly on familiar ground, the group delights in stretching the well-known tune's familiarity almost to its breaking point. The arrangement, the timekeeping and the soloing are complex and playful at the same time. Pianist Michel Reis picks up an idea from the closing notes of Terrier's solo and builds it into a thoughtful and closely argued solo of his own.

The appearance of Terrier, a bright new talent in Garzone's mold, and the generous presence of Garzone on several tracks would more than justify Stop Requested, but there is more to recommend the disc. The rhythm section, particularly Reis and drummer Nick Falk, have that bright but weighty power that calls to mind the McCoy Tyner/Elvin Jones axis of the last few Coltrane recordings on Atlantic (say, Coltrane's Sound, from 1960). Listen to them, for example, in the long trio build-up to the closing "There's Snow Place Like Home."

If there is a downside to this project, it is that Terrier succumbs to the number one trap lying in wait for gifted young players: thinking of the disc as an artist's portfolio rather than a cohesive statement. The master-plus-apprentice front line, backed by a truly ass-kicking pre-Love Supreme (Impulse!, 1964) rhythm section, is a winning combination that lends coherence to the entire record.

Beginning the set with the more self-consciously groove-laden "Silsila," with Reis on electric piano, is a bit of a feint, but sounds great and complements the other tracks with acoustic piano. No, it's the detour through the meditative two-part "Praise," with guitar and vibes, that threatens to derail the proceedings, not least because the otherwise excellent Reis and Falk sound befuddled in this setting. It allows Terrier a very different setting for his soprano playing, but might have been better left to a separate project.

All is back on track fairly quickly, though, and goes from one thrilling climax to another; this is energetic playing throughout. It's tempting to paraphrase, clumsily, the disc's title, and request that this young saxophonist not stop, not for a long time.