By Mike Perciaccante
August 17, 2008
Sign in to view read count 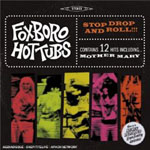 Green Day's 2008 CD release is, in a word, fantastic. But Stop Drop and Roll!!! can't be found under "G" in the local record store. Local retailers as well as the megastores all carry the disc, but it'll be found under "F" for Foxboro Hot Tubs. It seems that in 2007, while starting to work on the follow-up to American Idiot (Reprise, 2004), Billy Joe Armstrong and company decided that it might be fun to record a cool song that would guarantee airplay on Little Steven's Underground Garage radio show and, in all probability, not much more.

Somehow the song, "Mother Mary," caught on and hit the Top 20 Modern Rock Charts. The next thing the band knew, they were releasing an EP for free on the Internet. And it caught on, too. In April 2008, Stop Drop and Roll!!! was made available for download and is now available on CD. Boasting artwork and a package reminiscent of an old '60s vinyl LP, the disc plays like a tribute record to the rock sounds of the mid-'60s British Invasion and the best American Garage Rock.

Borrowing liberally from the punky, poppy, carefree rocking sound that can be heard on their early Kerplunk (Lookout, 1992) and Dookie (Reprise, 1994), as well as The Clash, The Stooges, The Yardbirds, and '60s bands including The Trashmen, The Shadows of The Night, The Easybeats, The Remains, The Screaming Blue Messiahs, and even Tommy James, Green Day hasn't sounded this vital in over ten years.

Stop Drop and Roll!!! is gritty, raw, powerful and peppered with a bit of psychedelia and rockabilly. It rocks with a sound suggestive of how Green Day might have played a frat party, circa 1967. The best songs on the disc are "She's a Saint Not a Celebrity" (featuring a Ramones "I Wanna Be Sedated" groove meets Jerry Lee Lewis piano backbeat), the power chord-driven "Alligator" (a not-so- veiled tribute to The Kinks and their signature song "You Really Got Me"), "Sally" (sounding like both The Monkees and a classic '60s garage band song), the funky, chunky boogie of "27th Ave. Shuffle" (with bassist Mike Dirnt doing his best John Entwistle impersonation), the cool, danceable rockabilly of "Ruby Room" (which sounds like it could have been written by the Stray Cats) and the title track (a frenzied Elvis-styled rocker). The catchy and charming "The Pedestrian" and "Broadway"—the two songs that sound most like Green Day—as well as "Mother Mary," with it's late-'50s/early-'60s groove, ain't too shabby either.

The CD has that great raw, simple, direct and straight-forward rock sound that made fans and critics fall in love with Green Day all those years ago.