By Bruce Lindsay
January 9, 2015
Sign in to view read count 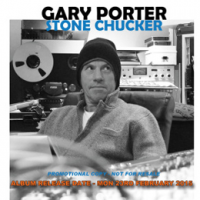 Back in 2012 Porter, a sextet from the county of Essex, just north of London, produced the highly enjoyable Can't Keep Still (Cornerblock Records). Two years later, band leader Gary Porter has released his follow-up, Stone Chucker. Boosting the line-up to a Spinal Tap sized 11, including guests, Porter has also upped the enjoyment quotient. His old-school mix of blues, R&B, jazz and soul bursts joyfully out of the speakers.

Drummer Phil Mount and keyboardist Dave Melling also contributed to Can't Keep Still, everyone else is a new addition to Porter's band: all of them make positive contributions. Porter's vocals are strong—relaxed yet soulful, they're immediately engaging and get the listener on-side as he tells his tales of outlaws, failed romance and, in the case of "Stone Chucker," a fiend straight out of a Stephen King novel who'll "break all your bones with his pocket full of stones." Porter confines his guitar playing mostly to a rhythm section role. His lead parts and solos are relatively rare: they aren't likely to give B B King any sleepless nights, but Porter shares King's talent for understatement and confidence in leaving plenty of space.

Lisa Mills joins Porter on lead vocals for three songs. Her tough and bluesy voice works well with Porter's more soulful sound: the pairing gives added punch to "Stone Chucker" and spices up the romance of "Can't See The Wood For The Trees" (where Mills could at times pass for Scotland's legendary Lulu) and "Hand On My Heart."

Mount and bassist Geoff Conway keep the beat strong, but the heart of the band is the horn section—it is, to coin an Americanism, "badass." Saxophonists Graeme Turner and Lee Badau deliver some of the toughest sax lines anyone could wish for, aided and abetted by Sting "Ray" Davies' trombone. The screeching tenor that opens "The Way It Is!" sets the tone for one of Stone Chucker's liveliest numbers. On a quieter note, Turner's soprano sax solo adds a fragility to "Breadline" that suits this tale of a fortune lost.

Drop into any one of these songs and there's likely to be something going on that immediately grabs attention. Steve Weston's raw harmonica gives "Steamtrain Blues" an edgy Delta blues feel. Melling's piano intro to the slow blues of "Hand On My Heart" moves things briefly in a classical direction. Backing vocals from Amarra Smith and Shanice Smith sweeten the pop-ska of "When You're Gone": Davies' trombone and organ give it a richness and warmth. Melling's "Riff Raff" was Can't Keep Still's dance floor filler. His optimistic "Take Me Back" does the job on this album, giving every band member the chance to stretch out and blow.

The blues has been around for 100 years or so and continues to inspire songwriters and musicians. In one form or another it inspires each and every one of the songs on Stone Chucker, a great addition to the Porter resumé.

Stone Chucker; Hesitate; Can't See The Wood For The Trees; Breadline; Monkey; The Way It Is!; Steamtrain Blues; Hand On My Heart; When You're Gone; Take Me Back.