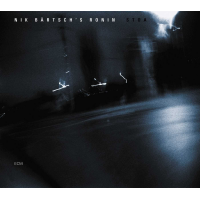 One of ECM's strengths is its ability to find young players with new conceptions that not only keep its catalogue fresh and innovative, but also often create insidious paradigm shifts which extend beyond the label's purview. In recent years artists like saxophonist Trygve Seim and pianist Tord Gustavsen have—often in the subtlest of ways—helped reshape contemporary music. Add to that list 35 year-old pianist Nik Bartsch and his group Ronin. As significant and groundbreaking an album as you're likely to find, Ronin's ECM debut, Stoa, is as much about what it isn't as what it is.

While repetition plays a large part in Bartsch's largely through-composed music, that's not due to any kind of electronic looping. With the exception of a little Fender Rhodes, Ronin is an all-acoustic, real-time ensemble featuring, along with Bartsch, bass/contrabass clarinetist Sha, bassist Bjorn Meyer, drummer Kaspar Rast and percussionist Andi Pupato. Minimalist composers, in particular Steve Reich's percussion-heavy work, are important antecedents for Stoa.

But while Bartsch's writing manifests unassailable architecture, the visceral grooves avoid the mathematically sterile trappings of pure minimalism. The repetitive nature of Bartsch's grooves could be considered hypnotic or trance-inducing if they weren't so interactive and impossible to relegate to the subconscious. And while there's a certain degree of improvisation in this music, it's by no means a singularly defining characteristic.

So what, exactly, is Bartsch's music? He calls it "Zen-Funk," and "Ritual Groove," and both are remarkably vivid and astute descriptions. The five numbered "Moduls" that make up Stoa emphasize organically evolving and propulsive interlacing rhythms, an almost antithetical perspective about soloing, and an approach that demands constant attention, rather than lulling the listener into a meditative state. Steve Reich meets Steve Coleman, if you will.

Despite such a strongly defined compositional approach, the five pieces on Stoa manage to blend into one another and create a seemingly continuous experience, yet they remain clearly delineated at the same time. "Modul 36," for example, opens the album with random strikes of a low piano note separated by long silences. A four-note arpeggio in 5/4 emerges, with Meyer's bass line gradually suggesting harmonic movement. Rast enters past the six-minute mark and a steady groove finally emerges. The closest thing to a theme shows up around the seven-minute point, where Bartsch and Sha alternate a series of long tones with a powerful unison flurry. Bartsch improvises at various times throughout, and while he stands out, it's less a case of virtuosity on display than responding to the maelstrom-like polyrhythms underneath. "Modul 32" is considerably darker, while the delicate beginnings of "Modul 33" ultimately lead to a more propulsive rhythm.

While repetition and gradual thematic evolution are fundamental parts of Bartsch's writing, so too is a compositional attention to melody that makes them more than mere experiments in intersection. Stoa is an important album that stands to expand the way we look at the junctures between repetitive motifs, insistent rhythms and form-based improvisation.