Home » Jazz Articles » Sting at the City Stadium in Macedonia 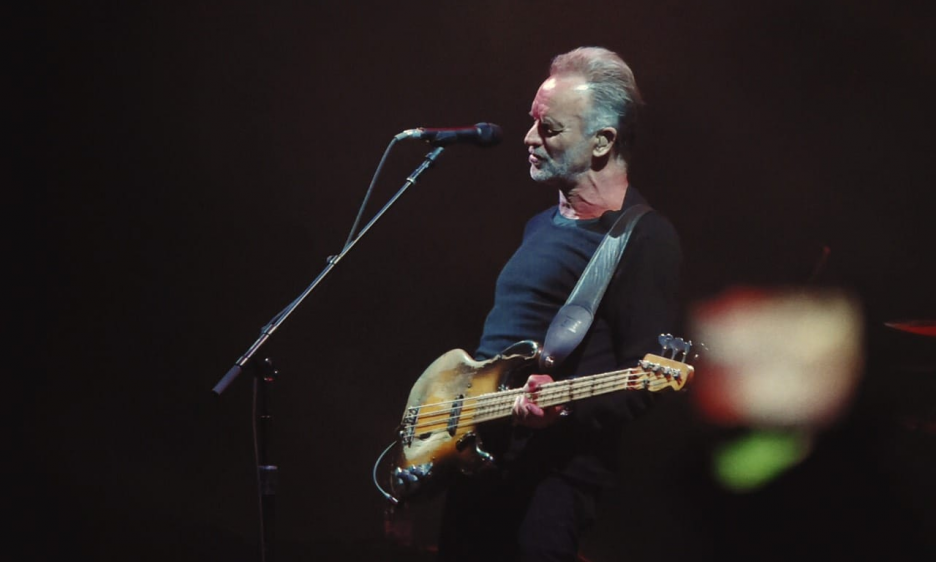 It seems that singer Sting's concerts here in this part of the world border on the miraculous. Just a few days since he kicked out his new world tour in support of his new album My Songs he visited Skopje for a stadium concert. When scheduling a summer concert one would expect great summer weather in June and not a monsoon season with heavy rainfalls and thunders. For weeks the weather was a mystery with all four seasons changing in a single day most of the time. Plus, that weekend a local handball club Vardar was fighting in the finale of a European championship something that people were very passionate about and Sting's concert had to be postponed an hour later than previously scheduled. All through the day, there were heavy rainfalls and even Sting did the soundcheck at the city stadium looking at grey weather and rain. We all braced for attending the concert under heavy rain. But, since the handball team won the championship against all odds the good mood was so contagious that not even bad weather could spoil that. The heavy rain soon stopped and there was a celebratory feeling on streets with people waving flags and honking through the streets. Many went to the city square to celebrate and many went to the city stadium to have fun in another way. Even previously when Sting played at the Boris Trajkovski Sports Hall two years ago, he did so by playing when local elections were happening in the midst of political chaos. All of the aforementioned contributed to an exciting and memorable evening ahead.

Supporting Sting for this occasion was Vlatko Stefanovski with his new trio. Stefanovski has a long mileage and has come to prominence with his band at the same time as Sting did with his own band in the late '70s. Under his belt are around 50 records and countless tours and performances in all constellations. I was late for his performance and entered the stadium in the midst of his set. Even outside the stadium, one could hear him thundering with his new trio. Half an hour later, Sting's band quietly took their positions on the stage but were enthusiastically welcomed by the audience. Sting graced the stage and made way into the first track, "Message in Bottle" taking his rightful place center stage. Since his new album is his greatest hits remodeled and reimagined basically the set for the concert is a beautifully curated trip through Sting's golden moments of his long and illustrious career. He drops in enough deep cuts to keep both veteran and newly found fans on their toes. His set was packed with hits in the first half hour with songs such as "Message in a Bottle," "If I Ever Lose My Faith," "If You Love Somebody Set Them Free," "Englishman in New York," "Brand New Day" and yet he 'd barely scratched the surface.

In the second set, the pace slowed and he unfurled a second group of hits: "Fields of Gold," "Seven Days," "Shape of My Heart," "Fragile" and a Police era classic "Wrapped Around Your Finger." This was followed by a dynamic reinterpretation of another Police era hit "Walking on the Moon" which was clearly propelled by his very able drummer Josh Freese. Basically, Freese was the MVP of the evening as he provided the creative spark behind the whole show and his drumming really made the difference. Sting was in top shape all throughout the evening and he sang beautifully even though he wasn't as dynamic on the stage as the previous time when he was all over the place. Still, 40 years into his performing career, he remains an absolute master at working a crowd. What was missing from his band was guitarist Dominic Miller who earlier canceled his solo tour in April due to sickness. Instead, alongside Sting were Dominic Miller's son Rufus Miller and guitar Ben Butler.

Apart from "Desert Rose" which was another climax, the rest of the set was devoted entirely to Police-era songs: "So Lonely," "Roxanne," "Can't Stand Losing You," "King of Pain," "Demolition Man" and "Every Breath You Take." After almost two hours of great songs, the band returned for one encore with "Next To You." Despite this being another show at the start of a long tour, it was evident that he put all of his effort into each song. He shared his genuine emotion with the audience. There was a sense of presence and spontaneity communicated to an audience who sang and danced joyously throughout. Sting didn't talk much—he thanked the audience in Macedonian occasionally, but he was all smiles and waves and looked to genuinely be having a blast up there. Even though his previous show in Skopje was much more exciting and electrifying than this, this one will also remain as special. The show felt like one long, sustained highlight where the songs received warm ovations and the singalongs were loud, widespread and almost nonstop.