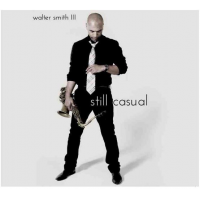 There are countless musicians who perform but few that can make their instruments breathe as melodically as saxophonist Walter Smith III. In the opening track "Foretold You" from his release Still Casual, it's as if his horn is an extension of his thoughts and will—notes burning, graceful and flowing like a stream of ideas. Yet with these obvious abilities Smith is a diligent craftsman whose arduous schedule includes education, tours, and performances within a rotation of rising jazz leaders that includes trumpeter Ambrose Akinmusire and Eric Harland's Voyager ensemble.

Since his debut Casually Introducing (Fresh Sound New Talent, 2006), Smith continues to refine his voice balancing the roots of tradition and the pulse of today. Still Casual, his fourth release, is an effervescent work of original music. There's the powerful blast of "Something New" as Smith and Akinmusire lay down solo fireworks while bassist Harish Raghavan and drummer Kendrick Scott create the rhythmic tension. A cradle of spaciousness envelops "Apollo" with its reiterating emotive theme and undulant chords from pianist Taylor Eigsti and guitarist Matt Stevens. The band's chemistry is flawless.

Smith's writing is also evolving. "Fing Fast" churns through a swinging tempo yet ends with Eigsti's harmonious piano and keyboard hook. The circuitous "About 360" is as intense as swing can get, a grueling workout driven by the rhythm section and elevated by the soloists. As in his previous releases Smith demonstrates a proclivity for intricate ballads in the compelling "Greene" dedicated to saxophonist Jimmy Greene who lost his daughter in the tragic shootings at Sandy Hook Elementary in 2012. Smith's tenor is deep, full of sentiment and resonance.

There are numerous answers to the question of what jazz sounds like today with countless self-expressions being played out across the world. But a microcosmic view can be heard in the music and excellent young musicians in Smith's Still Casual.