Steve Winwood at the Space at Westbury 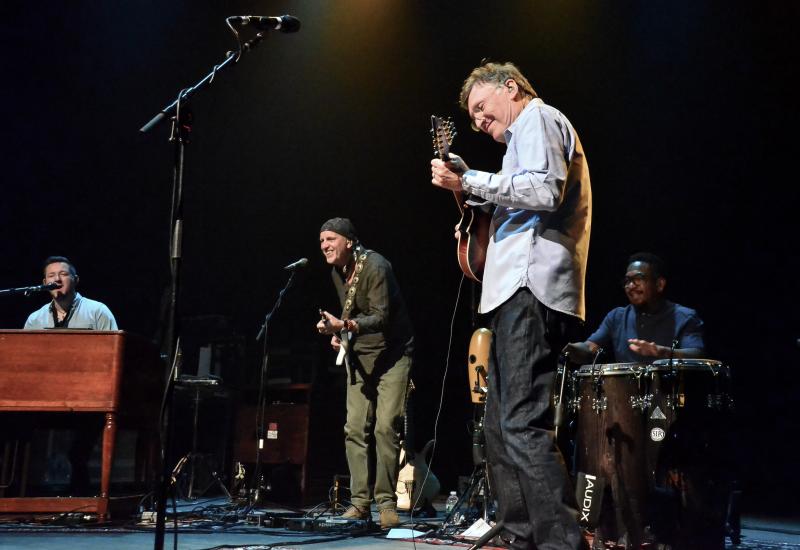 By MIKE PERCIACCANTE
May 6, 2017
Sign in to view read count
Steve Winwood
The Space at Westbury
Westbury, NY
April 20, 2017

Fifty-one years after a teenaged Steve Winwood sang "Gimme Some Lovin'" with the Spencer Davis Group, the rock, pop and rhythm and blues legend can still nail the vocal and hit all the notes on the '60s anthem. On a cool, late April Thursday evening in Westbury, NY, Winwood and his stellar band served up a tasty collection of tunes that touched on all aspects of his extensive catalog.

The child prodigy, who burst on the scene in 1965, with the Spencer Davis Group's first number one single "Keep On Running," has led a long and storied career. During 1966 Winwood joined guitarist Eric Clapton in a band that has been mostly lost to time. Eric Clapton and the Powerhouse recorded a number of tunes for Elektra Records, but sadly only three were released on the What's Shakin' compilation (Elektra Records, 1966). After penning and recording "Gimme Some Lovin'" and "I'm A Man" for the Spencer Davis Group, Winwood met drummer Jim Capaldi, guitarist Dave Mason, and multi-instrumentalist Chris Wood. Soon after, in 1967, Winwood left the Spencer Davis Group and along with Capaldi, Mason and Wood, formed Traffic.

Capaldi and Winwood formed a songwriting partnership that yielded some of Traffic's most popular songs including "The Low Spark Of High Heeled Boys" "Dear Mr. Fantasy," "Pearly Queen" and "Freedom Rider." During Traffic's career, Winwood handled the majority of the lead vocals. In addition, the multi-instrumentalist can be heard playing keyboards, guitar and bass on the band's recordings. In 1969, Winwood formed the supergroup Blind Faith with Eric Clapton, Ginger Baker(drums) and Ric Grech (bass). The band released one self-titled album (Atco Records, 1969) and toured behind it. Clapton left the band at tour's end. Baker, Winwood and Grech then formed Ginger Baker's Air Force. Denny Laine was recruited to play guitar. The group also included Wood and a number of other musicians including Phil Seamen, Harold McNair, John Blood and Graham Bond. The project was short-lived and Winwood returned to Traffic. Traffic reformed sans Mason and released John Barleycorn Must Die (United Artists, 1970). In 1971, Mason returned and Traffic expanded. The band added Grech on bass, drummer Jim Gordon (of Derek and the Dominos) and Ghanaian percussionist Rebop Kwaku Baah. This group recorded the Welcome To the Canteen (Island Records/United Artists, 1971) and The Low Spark of High Heeled Boys (Island Records, 1971) albums. For Shoot Out At The Fantasy Factory (Island Records, 1972), Gordon and Grech were replaced by drummer Roger Hawkins and bassist David Hood. Traffic continued to release albums during the '70s (albeit with some personnel changes).

In the mid-'70s, Winwood left Traffic and spent a few years in semi-retirement. In 1977, he released his first solo album, the self-titled Steve Winwood, on Island Records. Since that time he has released an additional eight solo albums and 2009's live recording with Eric Clapton Live From Madison Square Garden (Duck/Reprise Records).

During the course of his career, Winwood has won numerous awards and accolades. In 2005, Winwood received a BMI Icon Award. Rolling Stone ranked Winwood #33 in its list of the 100 Greatest Singers of All Time. Winwood has won two Grammy Awards and in 2004 was inducted, as a member of Traffic, into the Rock 'n' Roll Hall of Fame.

Following an opening set by his daughter Lily Winwood, the Long Island faithful were treated to a powerful concert that began with Winwood on his Hammond B3 organ (later in the evening, he shifted to guitar) for his solo hit "Back In The High Life Again." It was immediately apparent that the iconic blue-eyed soulman was in fine form. A tour de force version of Traffic's "Pearly Queen" followed. He then delivered a jazzy, subdued version of "I'm A Man." It was at this point that Winwood smiled, grinned and addressed the crowd. He said, "Thank you very much, and good evening. It's good to be here."

The evening progressed with an excursion through the highlights of his career. The singer skillfully balanced the journey through his fifty-plus years of material while honoring Traffic with powerful versions of "The Low Spark of High Heeled Boys," "Light Up Or Leave Me Alone" and "Empty Pages" as well as Blind Faith with the classics "Can't Find My Way Home" and "Had To Cry Today." He also performed Buddy Miles' "Them Changes" (which he had covered with Eric Clapton on the Live From Madison Square Garden album) and "Fly" from his Nine Lives (Columbia Records, 2008) release. Though the performance was short, throughout the evening, the audience comprised of mostly baby-boomer fans showered Winwood with cheers, whistles and requests for personal favorites. The main set concluded with "Higher Love," the hit single from his fourth solo album Back In The High Life (Island Records, 1986). On this night it was performed as a duet with his daughter Lily. This version of the song had gained fame from its use in a Hershey commercial.

Winwood and his excellent touring ensemble (Richard Bailey on drums, Jose Neto on guitar, multi- instrumentalist Paul Booth and Edson "Cafe" Da Silva on percussion) returned for a two-song encore. Upon hearing the first notes of "Dear Mr. Fantasy," the audience members swayed and crooned along with Winwood. The evening ended with Winwood, his daughter, the band and the crowd rocking out to "Gimme Some Lovin.'"