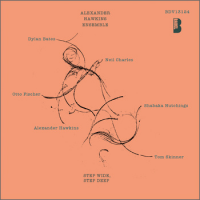 British composer, pianist Alexander Hawkins possesses the goods to be a world-beater in avant-jazz circles. He's collaborated with legendary drummer Louis Moholo-Moholo (Brotherhood of Breath) and co-leads the Convergence Quartet amid his concurrent 2014 solo piano release Song Singular and other notable endeavors for this UK-based record label. Hawkins' compositional prowess takes center-stage on this high-flying sojourn, showcasing a superfine band that communicates extraordinary synergy, coupled with towering solo spots and a penchant for zooming in for the kill, while imparting a cavalcade of paradigm shifts.

The opening extended piece "Step Wide, Step Deep," sets the stage for a cyclonic joy ride. Hawkins directs the ensemble through a string of odd-metered time signatures, awash with striking dynamics, abrupt accents and off-kilter rhythmic detours. Here, Dylan Bates' entwining violin passages and Shabaka Hutchings' fervent clarinet lines yield a conglomerate of contrasts, as the band also works within bop frameworks and weighty crash and burn metrics. Hawkins' pounding block chords, dark hues, and flickering patterns intersect the soloing activities with free-flowing dialogues and some keenly orchestrated false endings. During the bridge, electric guitarist Otto Fischer retracts the energized current and rebuilds the structural components via his resonating phraseology, designed with animated and meticulously crafted single note licks. Yet they bounce back and soar towards a zenith while also injecting a rollicking shuffle groove, prior to the rhythm section's pummeling finale. Hence, a fascinating program from start to finish.