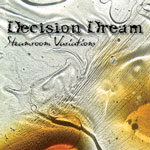 It was a fine day in August 2004 when Anthony Bianco, Magnus Alexanderson, and Jair-Rohm Parker Wells went into a former public bathhouse in east London to make a recording, which they did in the space of six hours. They used no overdubs, though Wells and Alexanderson used delay/looping devices and multi-effects.

Variations is the keyword here, and these players keep etching it into their music time and again. Is there a norm? Is there convention? Perhaps, but just for a time. There is no certainty as these flights of fancy take sound into different dimensions. The opening is not ominous of what lies in wake for the listener. The acceleration builds slowly, but the underlying sinew is unmistakable. Then it breaks open on feedback and loops, electronic impulses churning, the guitar screaming, the effects converging and then exploding. Before they are done, they have also dived into rock and heavy metal opening the styles with their open-ended inventions. And this is only Part 1.

Part 2 departs from the first, lying in the folds of electronica and driven by drummer Bianco and the many facets that the guitar adopts, from an organ to a screaming banshee. When Part 3 comes, innovation continues to be the motivator. There is a wide collage of sounds that roll and tumble, heady inversions getting to room with spaces that breathe into the passages. But the core of this segment carries the true impact as spontaneous improvisation braids the strands into a pulsating, awesome tapestry.