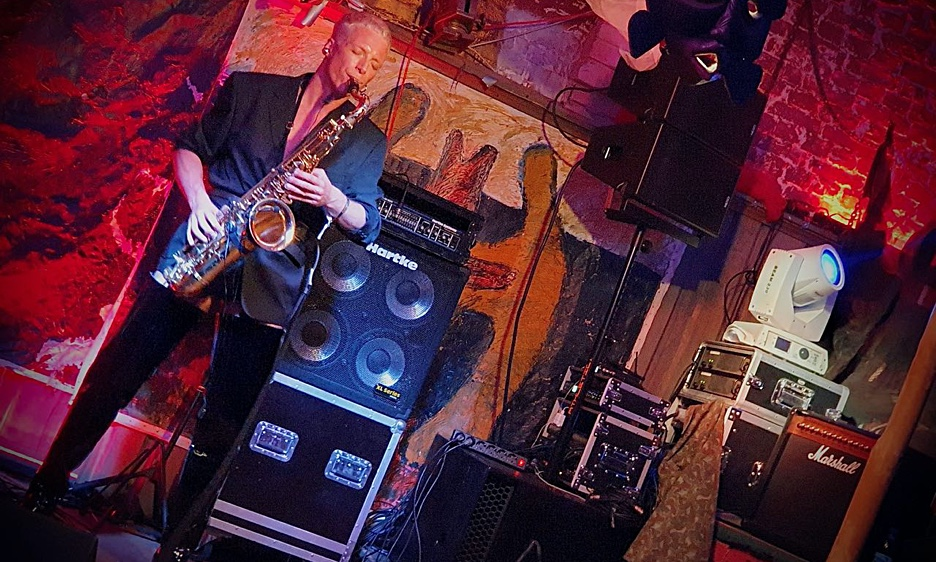 Only the Narva River separates this festival from Russian territory. This is the easternmost point of Estonia, with the compact Station Narva taking place in the environs of Art Club Ro-Ro, right on the riverbank. There's the main Pealava outdoor stage, plus a blank factory unit that acts as the Tantsulava dance stage, simply three walls and a raised security door, opening up to the outside air. The upstairs room of Ro-Ro itself provided a cosier place, a mini-theatre, with tiered wooden seating.

The main stage was conspicuously devoid of interest, swimming in the mainstream. It would have hosted and boasted a fine clutch of visiting acts: Roni Size, from England, Mouse On Mars, from Germany, and Iceage, from Denmark. Days before the festival, all of these lands went red, compared to the amber virus-count of Estonia, so inbound headliners were suddenly lost. Fortunately, the alternative stages were still offering several great acts, mostly from Estonia itself. The Narva zone has a vast majority of Russian speakers, so folks might have considered some of the bands to be swimming in from across the border.

There wasn't much jazz here, but the Norwegian tenor saxophonist Bendik Giske climaxed the evening with his solo set in Art Club Ro-Ro, hooked up with multiple microphones and bent on extensive repetition cycles, sounding, but not looking, somewhat akin to Colin Stetson. The latter is not known for pulling on thigh-high pvc boots. Giske's debut album, Surrender, was released by Smalltown Supersound in 2019, followed by an ep with remixes from Lotic and Deathprod. Lately he's been living in Berlin. Giske offered a different angle to Stetson, on a higher-ranging horn, splitting his set into shorter, contained pieces, allowing more chance for palate-cleansing. Horse overtones were captured by a variety of microphone placements, employing percussive fingerings to interact with the tonal spirals. Circular breathing facilitated weighty gatherings of slippery mass, and Giske held the small gathering, transfixed under his spell.

Earlier, in Ro-Ro, there were a couple of life-loving combos, both adhering to melodic values, along with a certain amount of retro-styling. The local Narva band Tam i Tut delivered fast-breath melodies, with earnest, heartfelt Russian language vocals, convincing rather than ersatz. Acoustic guitar strums supported co-vocals, merging folk with rocksteady rhythms from cajon and upright bass. They almost sounded strangely Brazilian at times, like Os Mutantes. Their bandname is translated as 'there and here,' and when melodica was switched for flute, and then guitar, we could see what they intended by this description. Feeling good, they transmitted their positive aura with good cheer.

Still upstairs at Ro-Ro, singer Masha Jefimova led her Masha Ye outfit, electing Russian surf music as her conduit for rock. With a debut ep released in 2019, the drums, bass and guitar team locked tight behind their relaxed and confident vocalist. The guitarist licked out frequent twangerama solos, these ripples punctuating Jefimova's agile phrases. All of the band, and many in the audience sported glitter-smeared cheeks, so we were clearly here in the Masha heartland. Surf-reggae came hither soon, then the third number invited a klezmer dub sensation, jolting into klez-disco. Jefimova had an excitable vibrato during the knees-up sections of each song, even whipping out a kazoo at one stage. Both of these Ro- Ro bands epitomised the quality ethno-fusion approach to pop and rock.

Along the way at the dance stage, Fremen crouched on the floor, in front of her electronics spread. Lighting and mist aided a dramatic opening, with interpretive dance slow- unfolding, which soon led to a vocal presence. This was where this Polish Tallinn-dwelling artist faltered, with an overly dramatic delivery that could be termed operatic-goth.

Bible Club were far superior, a twosome with their gear-table set up on floor level, their backs to the audience in Miles Davis fashion, attaining a completely different level with their aggressively pulsing techno improvisations. At least it looked very much like they were choosing sonic directions spontaneously, frequently discussing strategies, and reaching over to micro-twitch each other's consoles and magic boxes, finger-tweaking and changing gears in flight, somehow finding time to light up cigarettes. Bass presence invited the listener to feed up the physical judderings, preferably by extending an ankle into the regolith bass bin path, legwear fluttering in this sub-gnashing virtual wind tunnel. Brutal kicks, hollow, curdled bass, your scribe's notebook and (local) cider inching across the speaker-top, pushed by the evil lowness, as swoops, clucks and clatters swarmed top-side, in a buffeting ventilator shaft crack-up. Enervating, but with the satisfaction of work conducted in a desperately energised fashion.

Thus was an entire evening's captivating music discovered, with nary a moment spent in front of the main stage, in true celebration of the alternative river-border experience.