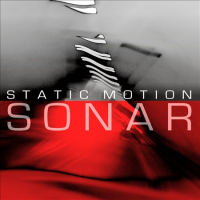 At a time when more recordings are released than ever before, it's rare to find a group that not just changes the way music is made, but the way it's defined. That description could easily fit Swiss pianist Nik Bärtsch and his longstanding group Ronin, its Ritual Groove Music jettisoning overt virtuosity and conventional form for ultra-disciplined structural constructs and a deeper kind of interaction amongst its members. The same can be said, however, for Sonar, whose A Flaw of Nature was, not coincidentally, released on Bärtsch's Ronin Rhythm record label. That 2012 debut garnered the Swiss quartet some serious critical attention; with the broader exposure possible from alignment with the intrepid Cuneiform label, Static Motion is sure to garner even more.

It would be a mistake to dismiss Sonar as a guitar-centric version of Bärtsch's Zen Funk, even though the same kind of deep determinacy and avoidance of virtuosity are clear connecting points. No, Sonar has its own language, based on tritone harmonics, poly- and isorhythms, and Stephan Thelen and Bernhard Wagner's interlocking guitars. Two guitarists is usually a recipe for chops- and effects-heavy playing; Sonar's six-stringers not only eschew typical guitar gymnastics but, for the most part, the plethora of electronics so often used today—opting, instead, for relatively clean tones and natural methods to introduce tonal variety. There's no looping and minimal post-production editing; instead, just four players interacting and, indeed, improvising with faultless accuracy on three sets of three compositions—a triptych of triptychs—that are hypnotically trance-inducing while, at the same time, absolutely commanding of conscious attention.

It's no surprise that Thelen participated in King Crimson co-founder Robert Fripp's Guitar Craft workshops; he reflects similar exactitude on the nine pieces contributed as Static Motion's sole composer. While there are but a few traces of Sonar's influences, there is a handful to be found; the title track tips Sonar's hat to Mahavishnu Orchestra's "Meeting of the Spirits," from The Inner Mounting Flame (Columbia, 1971), and Fripp's "Fracture," from Crimson's Starless and Bible Black (Island, 1974), while "Continuum" lifts a line from Emerson, Lake & Palmer's title track on Tarkus (Island, 1971), specifically the opening "Eruption." Where Sonar takes these slight but unequivocally recognizable touchstones, however, is somewhere else entirely.

The line between form and freedom is fuzzy; with unorthodox constructs and lack of clear soloing, everyone—including bass guitarist Christian Kuntner and drummer Manuel Pasquinelli—lifts Thelen's minimalist compositions off the page. Based on Sonar's download-only Live at Bazillus (Self Produced, 2012), however, while live performances stick closely to the scripted length of its studio performances, it's because improvisation remains predicated on the underlying rigor of Thelen's writing.

With progressive rock experiencing a significant resurgence, Sonar remains a rare outfit looking ever forward, with unrelenting emphasis on the true meaning of the word "progressive." There may be no 'trons, epic songwriting or instrumental pyrotechnics, but Static Motion—a clear evolution of Sonar's core concepts first heard on A Flaw of Nature— is an album whose slow-build approach to dramaturgy, couched in intrinsic minimalism, reveals plenty more with each and every listen.