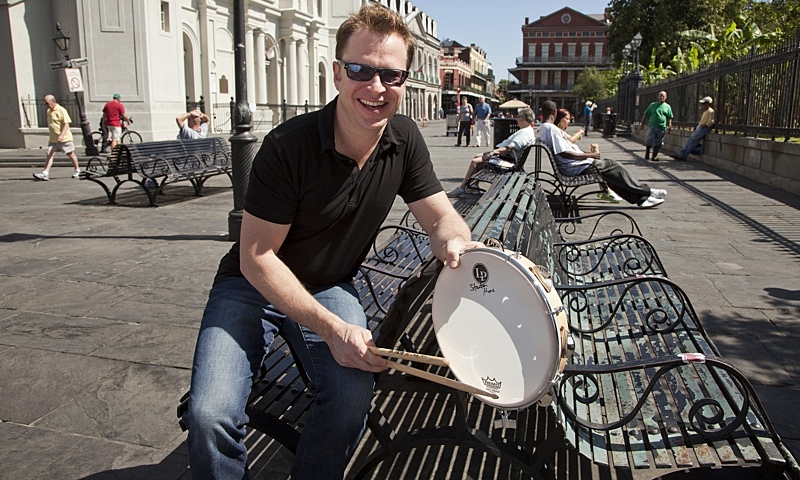 By GABRIEL MEDINA ARENAS
July 16, 2014
Sign in to view read count
Drummer Stanton Moore is one of the prodigal sons of New Orleans. His fans know him well from projects like Galactic, Garage a Trois and Dragon Smoke, which prodigiously fuse rock, jazz and funk.

Moore, whose musical career spans nearly 25 years, is also an educator and has released several instructional books and DVDs.

However, he had never recorded a jazz-only album. Before taking that step, he immersed himself in the jazz world, and played with jazz veterans James Singleton and David Torkanowsky for a couple of years. When he felt ready to record the album, he decided to fund the production through Indiegogo.com.

His rationale was the following: usually record labels lend money to artists, so they can pay for all the costs involved in recording their album. That advance is used to pay for studio time, pay the musicians, producers, engineers, cover the album artwork, etc. The problem is that artists don't receive money from the record until they repay the whole loan to the record label.

That's why Moore wanted to change the paradigm and record an album without the support of a label. Instead he asked his fans for help, and in exchange for their donations he gave them singles, T-shirts, drum sticks, signed CDs, etc. Moore surpassed his $35,000 goal in less than two months. It was a highly successful campaign.

All About Jazz interviewed Stanton Moore and he talked about the successful campaign to record his album Conversations, with James Singleton and David Torkanowsky. Moore also offered a diagnosis of the state of jazz's health in "The Big Easy."

All About Jazz: I know that you played at the New Orleans Jazz and Heritage Festival. So how did you feel about your shows?

Stanton Moore: It was amazing. The Galactic set was great, it was a lot of fun. Then I had my piano trio set, which was great and completely different than the Galactic set. It was really rewarding. The area was packed and we had at least two standing ovations. A lot of people hadn't really heard our latest piano trio album and we really worked hard on the campaign and the recording. It was very well received. It was really rewarding and amazing.

AAJ: Why did you name your latest album Conversations?

SM: For me, music is very conversational by nature. I felt that for the music that we were making together, it was especially true, it was especially conversational. We would get together and practice on Mondays. On Tuesdays we would play the gigs and rehearse for an hour and a half. So we often talked about what we played, and listened to recordings of the gigs, to try to improve it. When we play it is very back and forth, very conversational by nature. Besides, we chose songs that were either written by friends of ours or guys that each one of us had played with extensively. So these songs became like topics of conversation brought up by other peers of us. It just made a lot of sense to me to name it that way instead of finding a pretentious title.

AAJ: Being such a talented funk musician from New Orleans, why did you wait so long to record your first jazz-only album?

SM: There's a few reasons. One of them is that I was focusing on funk and groove, so I was busy doing that. Another reason is that I don't think I was quite ready to record a jazz album. Besides, I wrote a book, a DVD and a record for Groove Alchemy. Before recording a jazz album, I wanted to learn its vocabulary and to spend some years playing in a jazz ensemble to develop my jazz skills.

AAJ: Who are some of your favorite jazz musicians?

SM: Philly Joe Jones, Papa Jo Jones, specially his brush technique. I also like a lot Buddy Rich, specifically the years he played with Oscar Peterson. Another musician I really like is Max Roach, but the list could go on and on.

AAJ: How long did you take jazz drum lessons with Kenny Washington and Jeff Hamilton?

SM: With Kenny I took a couple of lessons. Each lesson was several hours long and Jeff is my partner in Crescent Cymbals, so we have played together, not necessarily in formal lessons, but I would go to his house and we'd open a bottle of wine. I'll start playing his drums with his brushes. It was a great time for him to show me stuff. I learned a lot by practicing with these guys, talking with them and listening to their records. They taught me to find my own voice in jazz.

AAJ: You funded Conversations through an Indiegogo campaign and you surpassed your goal of $35,000 in a month and a half. Were you surprised with the results?

SM: I'm not sure if I'm surprised, but I'm pleased. Because everybody rallied and supported me. I gave out a lot of T-shirts, vinyls and singles, so I also gave them something in exchange. But it was a lot of fun. I found a lot of people at the gigs who came and told me they had supported the campaign.

AAJ: Do you think this will become a new trend among jazz musicians who want to record their albums without the support of a big record company?

SM: I think it's becoming a trend already, I think it's great. I mean, it worked so great for me. Basically, what happened in the past if you wanted to make a record, you'd borrow money and then you would advertise it so people would buy it. So why not reach out to your fans in the first place and tell them about your record in advance? In the meantime, besides making a campaign you're advertising the record and creating a buzz around it. It's a different and exciting way to do things. I think that in the music industry that we live in, you have to think outside the box. So I'm very pleased with the way things turned out.

AAJ: Do you think that campaigns like yours will change things, or are the practices and attitudes of some record company executives going to change towards musicians?

SM: I can't say that for sure. But I think that more musicians are taking matters into their own hands. Things are changing and hopefully the production of the music will be more in the hands of the artists. I made this record because I love this music, I don't care if I don't sell tons of records. What's really interesting is that a lot of people know about the record and many of my fans contributed money for its recording. I found another way to make them feel they are part of me and my music. Hopefully I will also gain some new fans.

AAJ: One of the main reasons why your campaign was so successful is that you are well known. What do you recommend to unknown musicians who want to fund the recording and production of an album through Indiegogo or Kickstarter?

SM: The key is to reach out to your fan base, family and friends. For our first Galactic record we borrowed money from our parents. Another idea is to borrow smaller quantities of money from friends and fans. Lesser known artists can reach to their fans, friends and family through Facebook, e-mail lists and Twitter. I also e-mailed a lot of my friends and had to spread the word to look for their support.

AAJ: Are you composing or recording new albums for Galactic, Garage a Trois or any other projects?

SM: Yeah, absolutely. With Galactic we've released I think three singles this year and we have two more coming. With Garage a Trois, we regrouped as myself, Marco Benevento and Mike Dillon. Skerik decided to take a break for a while, so we're now playing as a trio.

AAJ: Do you plan to record more instructional DVD's?

SM: I'm about to release a subscription website with instructional videos and it will be available by the end of June. The subscription will be around $19.99 a month. There's tons of material there, some things from the beginning of my career, but also every new thing I do.

AAJ: New Orleans is loaded with talented musicians like yourself, Trombone Shorty, the Marsalis family. Jazz was born there, but since the 1920's New York has been the center of the jazz universe. Do you think New Orleans is recovering some of its cachet as the birthplace of jazz?

SM: It's extremely expensive to live in New York nowadays. So many musicians can't afford to live up there. I've noticed more young musicians are starting to move to New Orleans and more affordable cities. I don't know if that will change things for jazz, but I have seen that the streets and bars of New Orleans are full of new talent.