By WILLIAM GRIM
October 8, 2002
Sign in to view read count 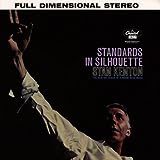 There was always much more to the Stan Kenton band than stratospheric trumpets and walls of sound. Nobody could play a ballad quite like Kenton. Lugubious tempos so slow they added an extra dimension of emotion to the overall effect. Dynamic control so profound that it seemed at times almost superhuman. And arrangements of such startling harmonic complexity that they breathed life into even the most hackneyed tunes from Tin Pan Alley.

Standards in Silhouette is one of Kenton's finest albums of ballads, and is unusual in that it features exclusively the arrangements of the then 22-year old Bill Mathieu. The selection of tunes is outstanding. From well known standards like "Willow Weep for Me" (also recorded previously by Kenton with a vocal by June Christy), Harold Arlen's "Slow Wind" and Hoagy Carmichael's "I Get Along Without You Very Well" to numbers you wouldn't expect to hear a Kenton band performing like John Lewis' "Django," this album is an aural delight for Kenton cognoscenti and newcomers alike.

The soloists on this album are among the finest from the many great sidemen who performed with Kenton over the years. Archie LeCoque on trombone adds his name to the illustrious ranks of Milt Berhnard, Kai Winding and Dick Shearer with inspired solos on "I Get Along Without You Very Well," "Willow Weep for Me" and "Lonely Woman." Bill Trujillo and Rolf Ericson are particularly effective throughout the album on tenor sax and trumpet respectively. The legendary alto saxophonist Charlie Mariano produces outstanding solos on "I Get Along Without You Very Well," "The Thrill Is Gone" and swings like a maniac on "Django." As always, the section work is second to none.

One song that deserves special attention is Bobby Troup's brilliant but sadly neglected "The Meaning of the Blues." Although there are a few vocal recordings of this work (The Four Freshmen and Janis Siegel immediately come to mind), Mathieu's arrangement is one of the few instrumental versions of this number ever recorded. Rolf Ericson and Bill Trujillo handle their solos brilliantly while the trademark Kenton high trumpets are employed to great effect in the out chorus.

A lot of critics didn't like (and still don't like) Kenton's band, calling it stilted or unswinging or too musically complex to be authentic jazz. Fortunately, real jazz fans ignored the critics because they knew the critics were wrong. Standards in Silhouette shows just how wrong the critics were.

Willow Weep for Me; The Thrill Is Gone; The Meaning of the Blues; When Sunny Gets Blue; Ill Wind; Django; I Get Along Without You Very Well; Lonely Woman; Lazy Afternoon