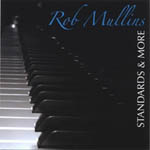 Listening to this album for the first time, I shouldn't have been surprised at Rob Mullins' straight-ahead jazz chops. To the best of my knowledge, this is the pianist/composer's first mainstream jazz album, but he has been quite prolific, recording sixteen albums since 1988. Mullins attended University of Northern Colorado, studied piano with George Russell in New York, and established his own label (RME). In addition to his own recordings as a smooth jazz bandleader, Mullins also recorded for Nova and Zebra Records and spent three years touring with the Crusaders (sitting on the piano bench vacated by Joe Sample). He has also worked with Branford Marsalis, Kirk Whalum and the Rippingtons. More recently, Mullins traveled with the Hubert Laws/David "Fathead" Newman group.

On Standards & More, recorded live at Steamers Jazz Club in Fullerton, California, Mullins showcases some of his own compositions, along with standards and classical themes, and his own playing is filled with flourishes and accelerated tempos. Tenor saxophonist Jimmy Roberts largely carries the melody line, bringing an R&B flavor to his solos. Mullins reports that Roberts has a lot of Stanley Turrentine in his playing, and I would concur with that, but not on all tracks.

The group interprets three songs from Great American Songbook—the Brent/Dennis piece "Angel Eyes," Ellington's "In A Sentimental Mood" and the Heyman/Young classic "When I Fall In Love"—and Roberts displays superior balladry on them. Coltrane's "Giant Steps" is based upon chord changes and an new intro that came from Mullins' studies with George Russell. The Bobby Timmons jazz classic "Moanin'" is given a right-down-the-middle version by the group, and Mullins arranged the oft-recorded "Für Elise" from the works of Beethoven. It is only on the original "Island Girls," which Mullins had popularized in the past, that his link to smooth jazz really shows through. Although it is a hook-filled, Caribbean-flavored tune, it doesn't really fit in with the other work on Standards & More.